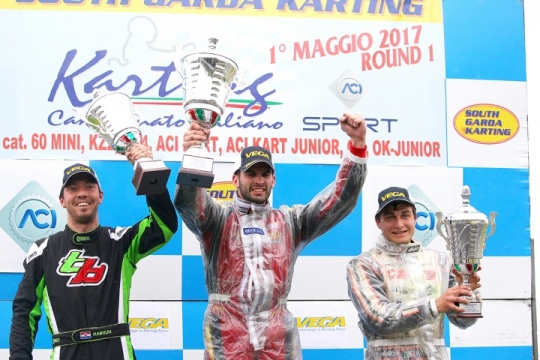 Press Release by: ACI Sport
Marco Zanchetta is the first leader in KZ2. In the other classifications, current leaders are Minì (60 Mini), Brizhan (OK-Junior), Carenini (ACI Kart), Cecchi (ACI Kart Junior) and Antoniello (KZ4).
The first round of the Italian ACI Karting Championship held last May 1st at South Garda Karting of Lonato has had a great participation of 258 drivers highlighting several protagonists in all categories.

The surprise in KZ2 came from Marco Zanchetta, who was competitive since the beginning at his comeback to racing on Maranello-Tm. He won the first final and was fifth in Race-2. Thanks to the big haul obtained with the victory of Race-1, Zanchetta holds the lead of the KZ2 Championship at 52 points.

Behind him, the Croatian Kristijan Habulin stands at 36 points on TBKart-Tm, thanks to a second place in Race-1 and the eighth in Race-2. Two CRG drivers are equal on points (34) in third place. Race-2 winner of SRP Racing Team Fabrizio Rosati and Mirko Torsellini of Modena Kart, who was sixth and third in the two finals. The French Nicolas Gonzales on Maranello-Tm is fifth at 27 points at the end of an exceptional comeback from the second chance race to the 11th position in Race-2 and the second in Race-2. Giacomo Pollini (Formula K-Tm) is sixth at 24 points, the Italian reigning champion Francesco Celenta (Praga-Tm) seventh at 23, the Russian Ivan Chubarov (Croc-Tm) eighth at 22, Alex Irlando (Sodikart-Tm) ninth at 20 and Danilo Albanese (Tony Kart-Vortex) rounds off the top ten with 15 points.

The Italian reigning champion Gabriele Minì (Parolin-Tm) is leading 60 Mini’s classification at 52 points thanks to a third and a second place in the two Finals of Lonato. Minì is followed by the American Ugo Ugochukwu (Energy-Tm) who totaled 46 points with the victory in Race-2 and a placing in Race-1. The third place of the provisional classification is held by the Belgian Euan Eyckmans (CRG-Tm) at 42 points.

The Russian Alexey Brizhan won both finals of OK-Junior on Tony Kart-Vortex and secured the classification lead with 66 points. Nicolò Cuman (Exprit-Vortex) and Luca Bosco (Tony Kart-Vortex) follow him respectively at 48 and 46 points.

ACI Kart had Denny Carenini as dominator on Tony Kart-Iame. He won in fact both Finals and harvested 66 points. Alessandro Brigatti, also on Tony kart-Iame, follows him at 48 points, while Francesco Pagano is third at 34 on Luxor-Iame.

In ACI Kart Junior, Federico Cecchi (Tony Kart-Iame) reached level 62 points thanks to the victory in Race-1 and the second place in Race-2 behind Tommaso Chiappini (Zanardi-Iame), who is third in the classification at 42 points. Alessandro Balzarotti (Energy-Iame) is second in the provisional classification at 48 points.

The provisional leader of KZ4 is Cosimo Antoniello (Oberon-Tm) who scored 27 points. Mauro Guidetti (VRK-Tm) follows at 24 and Maurizio Giberti (Maranello-Tm) is third at 23. KZ4 will resume from the rounds of Battipaglia and Siena.

The next rounds of the Italian ACI Karting 2017 Championship: