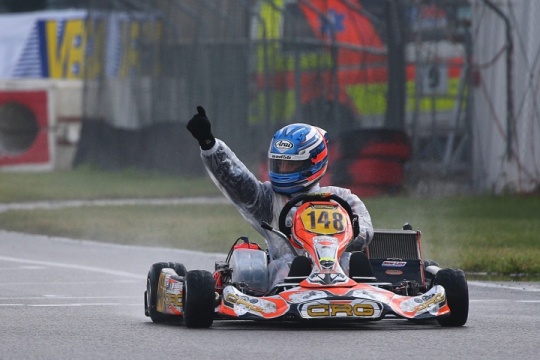 Press Release by: CRG Racing Team
Fabrizio Rosati won the second final at the opener of the Italian Championship in Lonato, while Mirko Torsellini got on the podium in P3. The very young Ean Eyckmans on the podium of 60 Mini.

CRG colors have been shining at the opening round of the Italian Karting Championship held at the South Garda Karting circuit of Lonato. Fabrizio Rosati and Mirko Torsellini got on the podium of KZ2 that had 68 drivers at the start, while Ean Eyckmans claimed the podium in the little 60 Mini that scored a participation record of 103 drivers.

MAIDEN WIN FOR ROSATI
Fabrizio Rosati claimed his maiden KZ2 victory on CRG-Tm run by SRP Racing Team in Race-2 after being among the main protagonists of Race-1 too. Alike, Mirko Torsellini has put in two excellent finals on CRG-Tm by Modena Kart, ending Race-2 on the podium. Torsellini had managed to close Race-1 on the podium, but was later on handed a 10s time penalty which relegated him to the sixth place.

Some other CRG drivers have been among the quickest of the 68 drivers on track in KZ2, like Luca Tilloca, who was seventh in Race-1 and the young Alessandro Giardelli, who is more and more at ease in this category. Giardelli was 13th in Race-1 and 12th in Race-2, showing  a good adaptation to the tricky track due to the rain fallen during the finals. The other CRG young driver at his first season in KZ2, Marco Valenti, was very close to getting access to the Final, but he could not hit the target due to an incident in the second chance race.

EYCKMANS ON THE PODIUM OF 60 MINI
The very young Belgian driver Ean Eyckmans on CRG-Tm run by EGP Racing Team, got on the podium of 60 Mini in a weekend that recored the participation of a stunning 103 drivers.  Eyckmans, always quick in this season, has taken the podium thanks to the third place in Race-2 after being fifth in Race-1. Among the front runners, the Norwegian Martinius Stenshorne of CRG Gamoto, was fourth in Race-1, while his team mate Alfio Spina was fourth in Race-2 after ending behind in the first final despite a front row start. Leonardo Bertini Colla recovered from an unlucky Final one up to the 22nd place of Race-2.

GIARDELLI AND  GRIGGS OK IN OK-JUNIOR
Luca Giardelli had a good weekend in OK-Junior. He was seventh in Race-2 leading Luca Griggs and Selina Prantl, while Mathias Torreggiani was 11th. The first final turned out to be quite difficult for all CRG drivers, exception made for Luca Griggs, who has been one of the few drivers risking to start on rain tyres as the rain was kicking in, and ended fifth, while Giardelli and the others on slick tyres had to retire.

The next round of the Italian Championship is scheduled for May 28th in Sarno.