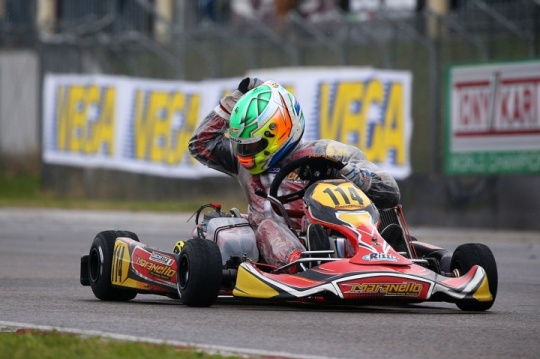 Press Release by: ACI Sport
Great protagonists in Lonato at the first round of the ACI Karting Championship.
The first round of the Italian ACI Karting Championship ended with a great spectacle in Lonato del Garda, with two finals for each category following the exciting qualifyings that involved a record number of 258 drivers present in this round.

Life of drivers has been made more difficult by the rain fallen at the end of the first round of finals, before stopping towards the end of the event as the track remained wet and tricky until the end.

The first of the two KZ2 finals, with 68 drivers on track, was won by a great Marco Zanchetta (Maranello-Tm) after Fabrizio Rosati and Mirko Torsellini, both on CRG-Tm, had a contact and took each other off while fighting for P1. The victory went therefore to Zanchetta at the end of a comeback run started from P10, while the Croatian driver Kristijan Habulin was second on TBKart-Tm. Torsellini was handed a 10s time penalty due to a contact at the last lap with the Russian Ivan Chubarov and therefore lost the third place that was inherited by Chubarov. Final two started with the inversion of the top eight of final-1. The victory went to Fabrizio Rosati, who took the lead at the start and pulled it away during the race. The second position went to the French Nicolas Gonzales, on Maranello-Tm, at the end of a great comeback, while the third place went to Torsellini again. Alex Irlando (Sodi-Tm) run a solid race and ended fourth, as did Zanchetta in fifth.

Category 60 Mini has been very tight after a strong selection that narrowed down the 34 finalists from the 103 entered drivers. The first final was won by the Russian Nikita Bedrin, on Tony Kart-Tm, as he pipped Michael Paparo (IPK-Tm) and 2016 Italian Champion Gabriele Minì (Parolin-Tm) in the sprint to the line, while the winner of a wet final-two was Ugo Ugochukwu (Enrgy-Tm), who proceeded Minì and the Belgian Ean Eyckmans on CRG-Tm. Alfio Spina (CRG-Tm) has been protagonist in qualifying and ended fourth recouping some of the positions lost in Race-1. Bedrin closed fifth leading Enzo Trulli (Tony Kart-Vortex), the son of former F1 driver Jarno Trulli.

In OK-Junior, with 16 drivers at the start, the Russian Alexey Brizhan on Tony Kart-Vortex won both finals. Brizhan proceeded Nicolò Cuman (Exprit-Vortex) and Luca Bosco (Tony Kart-Vortex) in the first final, while Bosco was second leading Cuman in Race-2.

A great participation characterized also the two Iame categories, namely ACI Kart that had 42 drivers at the start, and ACI Kart Junior with 21 drivers. In ACI Kart, the first final was won by Denny Carenini on Tony Kart-Iame, who led Alessandro Brigatti also on Tony Kart and Francesco Pagano on Luxor. Brigatti crossed the finish line of the second final on top, but a 10s time penalty relegated him to P4. The victory was therefore inherited again by Carenini, as the French Pierre-Louis Chovet was second and Vittorio Russo third, all on Tony Kart.

Federico Cecchi on Tony Kart-Iame and Tommaso Chiappini on Zanardi-Iame shared the victory in ACI Kart Junior. The first final was won by Cecchi, who led Alessandro Balzarotti (Energy-Iame) and Davide Menegon (Formula K-Iame), while Chiappini won final two leading Cecchi at the end of a good duel, while Balzarotti ended third.

The victory in the support race Entry level went to Paolo Tizzano on Italcorse-Lke.