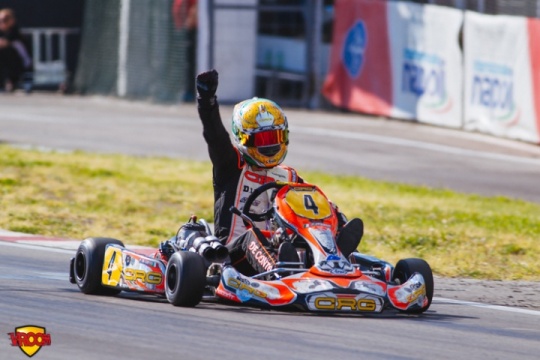 Anthony Abbasse (Sodikart-TM) took the head of the race immediately after the green light shadowed by the polesitter Simo Puhakka (Kosmik-Vortex), Jorrit Pex (CRG-TM), Jeremy Iglesias (Formula K-TM) and Paolo De Conto (CRG-TM). Before the end of the first lap, there was a contact between Iglesias and Hajek, so De Conto and Pex went through.

On lap two Puhakka and Abbasse touched at the end of the main straight and the Finn was forced to retire while Abbasse slipped into P6. On the fourth lap Paolo De Conto took the head of the race and pulled away while, behind his shoulders, a huge battle for the other two podium places flared up.

On lap seven Hajek settled into second position and left the battle, but De Conto was too far to fight for the lead.

Few laps later, on lap 11, Anthony Abbasse is forced to retire while he was fighting for the third step of the podium, leaving the position to his teammate Bas Lammers (Sodikart-TM). From lap 16 until the chequered flag the Dutchman fought hard to hold his position against the Pex brothers, Iglesias and Mirko Torsellini (CRG-TM).