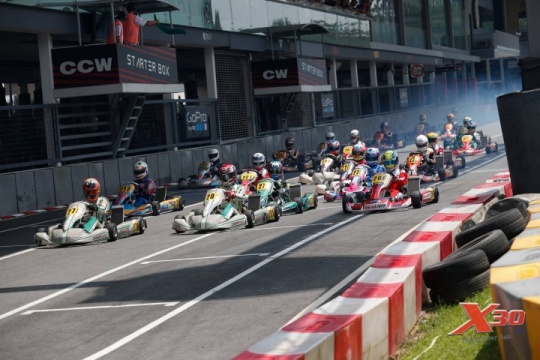 Press Release by: X30 Southeast Asia
X30 Southeast Asia kicks off with a rolling start.
It’s 7:30am in Singapore. The sky is dark, and the air damp. Storm clouds loom overhead, threatening to rain chaos and disruption onto the tarmac.
Mechanics and drivers shift nervously and pray for the sun to show. Not everyone is good in the wet. All that took place at Round 1 of X30 Southeast Asia last weekend.

The first edition of the 6 round championship attracted drivers from countries all across Asia. In five categories (X30 Rookie, Junior, Senior, Master, and Veteran), drivers put in fierce efforts among a highly competitive grid.

With the technical and thoroughly challenging KF1 Karting Circuit in Singapore being selected as the venue for the first round, the beginning of the 2017 season featured some of the best drivers in Southeast Asia.

Here’s what happened over the weekend.

In the Cadet category (utilising the X30 Rookie engine), a field of 14 promising drivers showed great pace throughout the race. In the Heats, Putera Adam and Christian Ho of I.S Racing (CRG) were relegated to the back of the starting grid after a failed formation lap in Heat 1. Both drivers showed great determination and clawed their way back to the front for a 1-2 position on the Pre-Final starting grid.

In the final, teammate Christian Ho stayed on Putera’s tail and challenged the race leader several times, but did not manage to overtake. Putera Adam ended the weekend as the Champion of Round 1, with Christian Ho 0.35 seconds behind him.

Also on the podium were Yevan David from Singapore (2nd Runner Up), Supakit Jenjitranun from Thailand (3rd Runner Up), and Vijay Arrendra from Malaysia (4th Runner Up).

All the young cadets displayed incredible promise and sportsmanship.

Always a familiar face at regional races, the Babyrace driver was on an unstoppable streak as he set a fastest lap of 46.286 during Qualifying, and snatched the pole position in every race thereafter, clinching a perfect finish to Round 1 of the series.

Coming in as 1st Runner Up was Alex Brown from Singapore (7 Racing – Kosmic), who showed great pace and co-ordination with his team.

Also on the podium were Eduardo Coseteng from the Philippines (2nd Runner Up), Wahyu Norhashim from Singapore (3rd Runner Up), and Nik Zamir from Malaysia (4th Runner Up).

The Senior category was without a doubt the most challenging grid to drive in. Featuring one of the strongest Southeast Asian line-ups in recent years, the race saw numerous National and Zone title holders battle it out over the weekend.

In a tremendously competitive field, Jayden Jin (AutoInc Racing – TonyKart), newly promoted from the Junior category, took pole position in the Heats with a qualifying time of 46.103, which also won him the GoPro Fastest Lap Award. Alongside his mentor Jason Burns (AutoInc Racing – TonyKart), the duo gave spectators a breath-taking race to watch, as they battled with and finally overtook Takeharu Nakamori from Japan (Musashino Kart Club / BMS – FA Kart) in the Pre-Final, thereby clinching pole and 2nd on the Final starting grid.

An incident in the first half of the Final shunted Jason and Jayden several positions back. Jayden was overtaken by Jason Burns, who then went on to fight toe to toe with race leader Prassetyo Hardja from Indonesia (AutoInc Racing – BirelArt).

It was a brilliant start to the season for Jeremy Lee in the Veteran category (AutoInc Racing – BirelART) and Brendan Lim in the Master category (Arina Racing – OTK).

Jeremy Lee, 46 years old and the 2016 Overall Champion, proved that he had it what it takes to be the fastest man in a combined grid of 17 drivers, with some more than 15 years his junior.

Brendan Lim, newly promoted to the Master category, also put in a tremendous performance despite having relatively less experience than his competitors.

In the Pre-Final, Jeremy Lee who started 3rd on the grid had a great start coming out of the turn 1, and clinched the pole position for the Final. Brendan Lim followed close behind and the pair led the pack during the Final for an outstanding 1-2 finish, with only a 0.09 whisker between them.
Also on the grid was contender and 2015 Overall Champion Lee Lung Nien (7 Racing – Kosmic), but an incident with his teammate Gary Koh (7 Racing – Kosmic) in lap 5 of the Final took them both out of the race.

The Round 1 podium for the Master Category comprised Brendan Lim as the Champion, Adrian Ferguson (1st Runner Up), Ang Kok Wee (2nd Runner Up), Alex Yoong (3rd Runner Up), and Derrick Tan (4th Runner Up).

On to the Next Chapter

The next round of X30 Southeast Asia will take place at Sepang International Kart Circuit in Malaysia on 6 and 7 May 2017. More information on www.x30sea.com.

Championship standings after Round 1 - Cadet Category.jpg

Championship standings after Round 1 - Junior Category.jpg

Championship standings after Round 1 - Senior Category.jpg