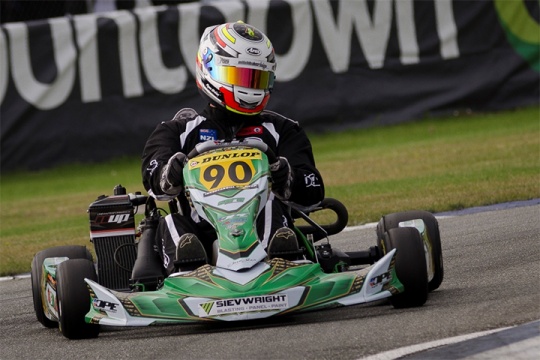 The Auckland pair were dominant in their respective classes at the biggest meeting on the New Zealand KartSport calendar, held over three days (Fri-Sun) at the KartSport Southland club's Invercargill Oil Shop Raceway on Sandy Point Domain.

Making it particularly special for the Kinsman family, Daniel's older brother and Sodi Kart team teammate, Mathew, won a title of his own on Sunday - the 2017 New Zealand Rotax DD2 one - and finished second to his brother in both the 125cc Rotax Max Light class Final on Saturday and - after  a titanic, race-long, battle with Christchurch driver Jared Cleghorn only resolved on the last lap and with just two corners to go - in the Senior 100cc Yamaha Final, on Sunday.

Fair enough too, as Mathew came back from a spectacular gearbox blow in the Rotax DD2 class Pre-Final and back row start in the Final to work his way to the front and eventually win the race from experienced Final pole man Ryan Urban, and class young guns CJ Sinclair from Auckland, Sam Waddell from Tauranga and Ryan Yardley from Christchurch.

Fellow Aucklander Ryan Urban did not go away from the meeting empty handed either, having already claimed his ninth NZ National Sprint title in the 125cc Rotax Max class Final on Saturday.

It was a close-run thing, with Dunedin's Aaron Black and Palmerston North's Ashley Higgins closing ominously on the final three laps, but Urban managed to stay in front until the chequered flag came out.

"I made a bit of a balls-up with my tyre pressures, so I am pretty happy with the result. I certainly didn't make it easy for myself," he admitted afterwards.

In the other Senior class contested on Sunday, Open, the NZ title went to Palmerston North teenager Jacob Cranston, after a drama-filled Final.

Christchurch ace Matthew Hamilton led out early on in a twin-engined kart he and his father John have developed over a number of years only to retire after just six laps. That left fellow front row starter, former Southland man Mark Elder, in the lead in his own, self-developed twin-engine kart.

He crossed the finish line with a comfortable margin on Cranston too, only to cop a 10-second penalty for a jumped start, relegating him to fourth place in the results behind Cranston, Matthew Butchart from Nelson and Chris Cox from Rangiora.

In the other Junior class contested on Sunday, Cadet ROK, the Final win and with it the 2017 NZ national sprint title went to reigning South Island champion Louis Sharp after first-past-the-post Tom Bewley from the Hawke's Bay was excluded afterwards over a technical infringement.

Emerson Vincent from Pukekohe did well to work his way up to third at the line then inherit second place after spinning and dnfing the Pre-Final, meaning he started the Final from the back row of the grid.

The big story on the first day of competition on Saturday was young gun Dylan Drysdale's win - against class titans Daniel Bray and Matthew Hamilton no less - in the 125cc/6-speed gearbox KZ2 class.

Hamilton, the defending class title holder and fastest qualifier this year, and former class champ and 2016 runner-up  Bray, shared the front row of the grid for the Final.  But as the field lined up for the standing start Hamilton stalled.

Because the field was already under starter's orders Hamilton had to sit helplessly and watch as the lights went out and the rest of the field ducked around him before he could get out and give his kart a push start.

"My mistake" he said afterwards. "We had the pace (as he proved by working his way back up to third by the time the chequered flag came out) but it was not to be, so we will have to come back and try again next year."

With Hamilton out it looked initially like Bray would catch and pass class new boy Drysdale and go on to claim the title. But with a clear track in front of him Drysdale eased away from his N-Zed Motorsport/GP Karts teammate (and team boss!) Bray and - before they were caught and passed by Hamilton - Aaron Marr, James Blair and Bailey Paterson.

In the other (Junior class Final) Christchurch youngster Jacob Douglas earned himself a trip to the ROK Cup International Finals in Italy in October by leading home Clay Osborne from Hamilton and 2016 South Island title holder Zac Christensen in Vortex Mini ROK.

Douglas spent the early part of the race battling with poleman Dylan Grant from Auckland in the Final but Grant was later excluded due to a technical infringement, elevating Osborne to second, Christensen to third and guaranteeing Douglas his first NZ Sprint title and trip to Italy for the ROK Cup event later this year.

Finally the best performance by a locally-based KartSport Southland club member was put in by Geoege Keast from Invercargill who finished fifth in 125cc Rotax Max Heavy and sixth in Senior 100cc Yamaha.