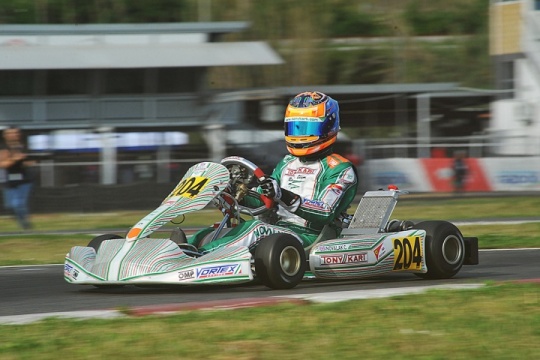 The event in Sarno was the final act of the WSK Super Master Series 2017 and it established the final standings of the competition. The kart racing Series promoted by WSK Promotion completed its season with nearly 1,000 scrutineered drivers in its four rounds. The next appointment is scheduled on 5th and 12th November with the WSK Final Cup, at the Adria Karting Raceway (I).

Bas Lammers is the king of the KZ2.

Bas Lammers (Sodi-TM-Bridgestone), with the 3rd place scored in Sarno, ended with a bang the Series and won in KZ2. He grabbed the leadership in the second round of Castelletto and can boast a victory in a Final and in two Prefinals. Lammers overtook his team-mate, the French Anthony Abbasse, who was the leader in the season-opener. Excellent end for the Czech Patrik Hajek (Kosmic-Vortex), the runner-up ahead of Abbasse, thanks to 2 victories in the Finals of the last  two rounds.

Also Clement Novalak (Tony Kart-Vortex-Bridgestone) won in OK thanks to a victory in the Final in the second round, when the driver – holder of an English licence – passed the Belgian Ulysse De Pauw (Kosmic-Parilla) in the standings. Two victories in two Finals (Castelletto and Muro Leccese) and three in Prefinals allowed Novalak to beat the Polish Karol Basz (Kosmic-Vortex). The latter, after the victory in the Final of Sarno, secured the runner-up position of the category beating De Pauw into third.

Winners of the Finals in Adria, Castelletto and of a Prefinal, Andrea Rosso (Tony Kart-Vortex-Vega) won the OK Junior keeping at bay several rivals. Behind the Italian driver, the runner-up was his fellow countryman Mattia Michelotto (Zanardi-Parilla), who recovered as far as second thanks to a victory in the Final of Sarno. In the last round, it was the English Harry Thompson (FA Kart-Vortex) who managed to grab the third place.

Gabriele Minì wins for a hair’s breadth in 60Mini.

The Italian Alfio Spina (CRG-TM-Vega) was the first leader of the category after the season-opener. Then in the 60 Mini was the turn of the Italian AndreaAntonelli (Tony Kart-Vortex), then the Russian Nikita Bedrin (Tony Kart-TM). Eventually, it was the Italian Gabriele Minì (Parolin-TM-Vega) who prevailed thanks to a decisive overtaking manoeuvre on the last lap of the Final in Sarno. He overtook Bedrin and scored a crucial third place which allowed him to secure the victory in the category. In the heated finale, Antonelli managed to keep the third overall position behind Bedrin.