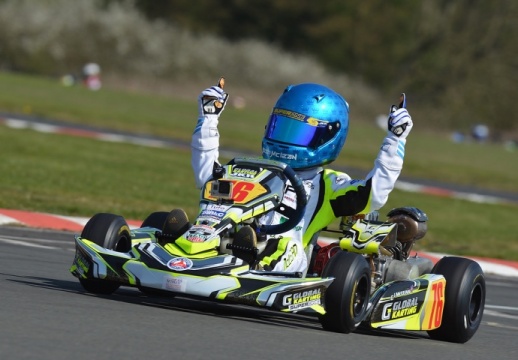 Press Release by: Super One Series
The TKMs took part in their second round and the Rotax 177s and Honda Cadets their first at Rissington with summer temperatures warming the panoramic Cotswolds track.
Koden helmets is supporting Super One with a carbon fibre helmet for the winners and an extra prize for the most podiums, as well as the Koden Academy which awards drivers wearing Koden helmets £100, £75 or £50 for podium positions, with Abbi Pulling in Junior TKM being the biggest beneficiary so far.

All photos should be credited to Chris Walker/Kartpix.net

Charlie Mann took pole on Saturday morning 11 hundredths ahead of Pulling then Mann went on to win both heats although with Pulling running him very close.

In Final 1, Archie Strong, who started 3rd, leapfrogged both Mann and Pulling at the start and led for four laps while Pulling worked her way back from 4th to the lead. Strong, Mann and Welham had turns in 2nd before James Pashley secured it but Welham received a driving exclusion after finishing 7th. Mann completed the podium.

In Final 2 Pulling led all the way while a battle raged for 2nd between Strong, Mann, Archie Albone, Kurt Roberts and Theo Hesketh, with Roberts taking the runner-up spot and Hesketh gaining 11 places to take 3rd, which was settled on the last lap.

Pulling now leads the Championship by five points from Ross Deal with Pashley 10 points behind that.

Adam Sparrow and Matthew Allnutt were 1st and 2nd in the first Final then swapped places in Final 2 at the front of the 43-kart field.

Sparrow headed Timed Qualifying 5 hundredths ahead of Peter Newman with Allnutt in 4th, then Sparrow won his two heats with Stephen Letts winning the other, but Max Goldsmith’s 2nd and 4th gave him 2nd on the Final 1 grid ahead of Letts. Allnutt was down in 11th after problems in his 2nd heat.

There were four different leaders and five changes of lead during the 18 laps of Final 1 - Sparrow, Letts, Sam Fowler and James Mills all up front before Sparrow managed to hold on to it for the last five laps. Allnutt gained three places to take 2nd on the last lap and Mills did likewise for 3rd.

In Final 2 Sparrow led for four laps before Allnutt took over, with Simon Vercoe then Fowler running 2nd before Sparrow passed Fowler in the closing laps.

Joshua McLean took both Final wins at Rissington for the first round of the year for Honda Cadet, where there were 42 entries requiring a Repechage.

Archie Brown qualified on pole from Alfie Rigby and rookie Oliver Stewart while the heat wins went to Harvey Charter, Oliver Bearman and James Walker, with Charter taking pole for Final 1 by virtue of his 2nd place in his other heat.

Charter ended up 11th after the start of Final 1 where Walker took the lead initially before Brown led for much of the race, with McLean glued to his bumper, making his move to win on the last lap.

McLean led the whole of Final 2 but only got away from the pack during the lkast lap jostling for position. Oliver Greenall had been 2nd for most of the race with Coskun Irfan taking 3rd. The result remains provisional due to an appeal to the Motor Sports Council over one of the black flags during the race.

The 177 class is back in Super One for a three-round Championship, with the other rounds being at Whilton Mill and Shenington where the winner will receive a ticket to the Grand Final at Portimao in Portugal in November, or a new Rotax Evo engine, supported by J.A.G.

The O Plate Chris Thomas won everything, including both Finals, with James Beacroft and Tony Dickinson vying for 2nd place. Dickinson was a solid 2nd in Final 1, but in Final 2 he came off at the start leaving 2nd to Beacroft, with Buster Mepham taking 3rd from Marcus Bazley early on.

Thompson is now eight points ahead of Beacroft in the Championship, followed by Mepham and Dickinson.