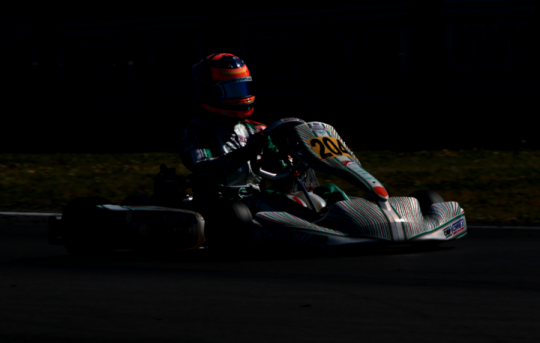 A sequence of high-level results has marked the weekend of our OK drivers. The Racer 401S chassis powered by Vortex engines were in perfect synergy with our drivers, allowing them to give their best. In the heats we succeeded four times, thanks to Hiltbrand (3 victories) and Novalak, who have finished the eliminatory heats in the second and fourth place, respectively.

Also Vidales placed in the top positions, seventh, and Petecof was not far away, with the sixteenth place.

In the prefinal the potential of both drivers and chassis was confirmed with a formidable double-win of Novalak and Hiltbrand (B prefinal) and Vidales in the fourth place (A prefinal).

In final Novalak fought for the podium with determination, dealing with his teammates Hiltbrand and Vidales, Travisanutto and Valtanen. Only the overall classification suggested Clément not to take unnecessary risks being satisfied with a fourth place, whose placement took him to the WSK Super Master Series success.

The podium was gained by our driver Pedro, excellent second position behind the Kosmic Kart-Vortex chassis of Basz.

Vidales had to abandon the race and the tussle for the podium, with three laps to go.

With the race at the circuit of Naples, Clément takes, as mentioned, a deserved title, reached on the path of a huge success, two victories and three prefinals.

In the Mini class the young Racing Team driver, Andrea Antonelli, fought to the last, with determination, for winning the title in his category. Unfortunately, he missed the victory, however the clear impression is that the Neos-Vortex is a chassis which will run at the top positions in the future. In fact, Andrea won three heats and the prefinal, which results gave him the necessary scores to get on the third step of the podium of the WSK Super Master in the Mini class.

In the shifter category, KZ2, Ardigò was leader in two heats and fought for a good part of the final for a place on the podium. A penalty of 5" prevented him to get on the podium.

Important was also the comeback performed by our drivers Luca Corberi and Alessio Piccini in their respective prefinals. After a sequence of unfortunate heats, Luca and Alessio, were able to recover numerous positions, easily entering the final.

In OKJ Viktor Gustavsson got a collision in the prefinal (B), and could not enter the final. Despite this, even in the cadet category, we could see our brand supremacy, thanks to Italian Andrea Rosso (Baby Race Team), who won the championship title.