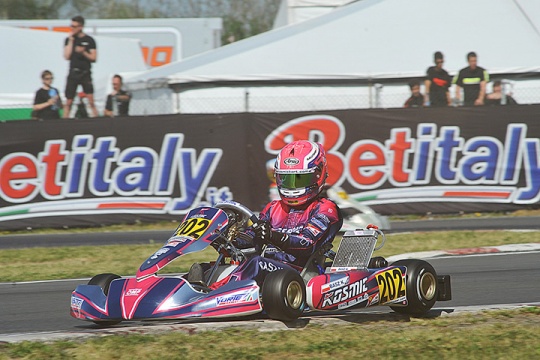 He was waiting for another title win and at age 31, he won again on his favourite track, Sarno. Second, first, third and third: four rounds, four podium places. Bas Lammers (Sodikart-TM) took home the 2017 WSK Super Master Series championship after a smart race in Sarno where he managed to control the situation avoiding unnecessary fights. The new Kosmic Kart driver Simo Puhakka (Kosmic-Vortex) dominated the weekend since qualifying, but in the final race was forced to retire after few laps and from that moment his teammate Patrik Hajek (Kosmic-Vortex) took the lead of the race getting away from the pack followed by Anthony Abbasse (Sodikart-TM) and Lammers who settled for third, enough to keep the leadership of the category.

Karol Basz (Kosmic-Vortex) was the man to beat in Sarno within the senior direct drive class: he topped the sheets since qualifying earning the pole position for the final race. In the final race he lost the leadership in favour of Padro Hiltbrand (Tony Kart-Vortex) who tried to open a good gap, but the Pole was unstoppable and in a few laps he took the leadership once again, crossing the line in first. Third place for Lorenzo Travisanutto (Zanardi-Parilla) in front of title winner Clement Novalak (Tony Kart-Vortex) who managed to race safely to claim the title.

A fifth place in the Prefinal A was enought for Andrea Rosso (Tony Kart-Vortex) to claim the 2017 title. With the new champion “relaxed”, the fight for the win moved to Christopher Lulham (Tony Kart-Parilla) and Zak O’Sullivan (FA Kart-Vortex). They had a good start and led the pack for the first three laps, then they had a contact. With the two Brits out, the Italian Mattia Michelotto (Zanardi-Parilla) only had to keep at bay the driver from Barbados Zane Malhoney (FA Kart-Vortex) to win the race. Third place for KSM Schumacher’s Luigi Coluccio (Tony Kart-Vortex).

Heated battles between many drivers in the 60 Mini Final. During the first stage of the race, the Italian Gabriele Minì (Parolin-TM) had a hard time and dropped back from the first position. The Russian Nikita Bedrin (Tony Kart-TM) was very near to the victory of the Series, but Minì managed to achieve a great recovery and to grab the third place on the last lap. Minì won the Series in the nick of time, while the Final of Sarno went to the Brazilian Rafael Camara (BirelArt-TM). Second place for the Italian Francesco Pulito (EvoKart-TM).