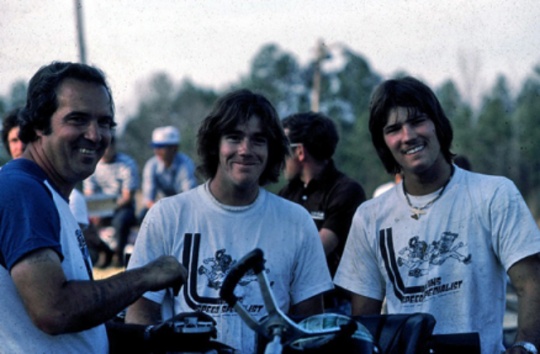 Author: Vroomkart International
Legendary American karter Kyle Adkins died in his sleep Wednesday the 5th of April 2017. The California Flash as he was called by Margay in their advertising campaigns in the middle 1970’s had just undergone heart surgery last month.
written by Frank Weir.

Kyle was President of Adkins Speed Center one of the leading builders of kart engines in North America having acquired over 30 years of experience with every type of kart engine. During the seventies Kyle and his brother Tony along with their father Bill were a formidable team in karting, trading as Adkins Speed Specialist, and were located in the Los Angeles area of California.

Kyle relocated to northern Ohio in 1986  having purchased the karting facility at Gnadenhutten near Port Washington were he continued to  develop his customer's engine programs and provide trackside services at all WKA Manufactures Cup and Midwest Sprint Series races along with selected club races in the Midwest.

Kyle’s brother Tony sadly lost his life to cancer on the day that Kyle underwent his quadruple heart surgery.

Sincere sympathies are extended to the Adkins family at this time.