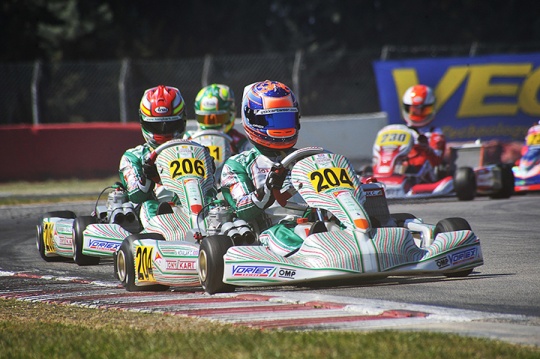 Press Release by: WSK Master Series
The new standings of the WSK Super Master Series after the round in Muro Leccese. The leaders are Lammers (Sodi-TM KZ2), Novalak (Tony Kart-Vortex OK), Rosso (Tony Kart-Vortex OKJ – sub-judice) and Bedrin (Tony Kart-TM 60Mini). Last round in Sarno (Salerno, Italy) on 9th April.
With only one round to go, in the WSK Super Master Series everything can still happen in the four categories taking part in the event. In the last race, which will be hosted by the Napoli Circuit in Sarno (SA) on 9th April, there will be 153 points to be awarded: more than enough to change the final output of the standings.

Lammers keeps the leadership in KZ2.

Patrik Hajek’s victory (Kosmic-Vortex-Bridgestone) in KZ2 in Muro Leccese allowed the Czech driver to reach the third overall position with 113 points. The Dutch Bas Lammers (Sodi-TM), 201 points, is still the leader after the 2nd position achieved at La Conca, while the French Anthony Abbasse (Sodi-TM) did not manage to finish the round in the top positions but, however, he is still second with 175 points. Behind them, Iglesias (Formula K-TM) with 145 and Ardigò (Tony Kart-Vortex), 126 points.

Novalak always on top in OK.

The British Clement Novalak (Tony Kart-Vortex-Vega) won the Final in Muro Leccese and he is still the leader of the OK with 258 points. Despite that, the Belgian Ulysse De Pauw (Kosmic-Parilla) is second with 186 p. thanks to the results scored last week in Apulia and leads the pack of pursuers of the category leadership. Behind him, with a very narrow gap (166 points), another frontrunner, the Spanish David Vidales (Tony Kart-Vortex). Basz (Kosmic-TM, 153 p.) and Travisanutto (Zanardi-Parilla, 105 p.) are ready to attack the top positions.

Rosso suffers from the attacks in OKJ.

The final standings of Muro Leccese is still sub judice in OKJ, but Leonardo Marseglia’s victory (Zanardi-Parilla-Vega), achieved after the penalty given to Harry Thompson (FA-Vortex), shook the category. Rosso (Tony Kart-Vortex) is still the leader with 219 points, followed by Marseglia with 164 points, enough to try to aim at the final victory in Sarno. Thompson occupies the third position with 150 points, only a point ahead of the Australian Jack Doohan (FA Kart-Vortex). Bulantsev (Tony Kart-Vortex) drops to 5th with 124 points.

Bedrin gains the head of the 60Mini.

After Muro Leccese, the new leader in 60 Mini is Nikita Bedrin (Tony Kart-TM-Vega) with 209 points; the Italian Gabriele Minì (Parolin-TM) trails by only 8 points in second position (201 p.) after the victory at La Conca. The Italian Andrea Antonelli (Tony Kart-Vortex), who didn’t manage to score a podium position in Apulia, drops to third position with 195 points. Behind them, Spina (CRG-TM), who was rather unlucky at La Conca, and the American Ugochuckwu (Energy-Iame).