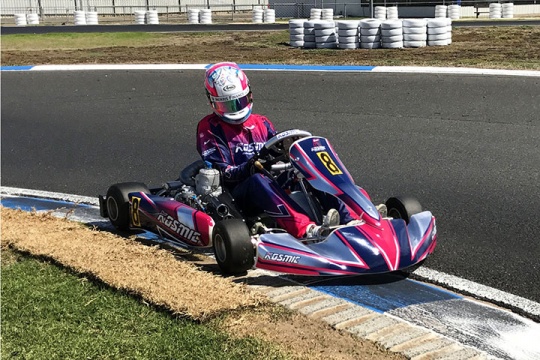 Press Release by: Karting Australia
Former Bathurst 1000 Champion Nick Percat will trade his Holden Supercar for a Kosmic 125cc KZ2 kart when the Australian Kart Championship presented by Jayco and Castrol EDGE, heads to Geelong, Victoria next weekend (April 1/2).
Fresh from competing for the Brad Jones Racing Supercars outfit at the Formula 1 Rolex Australian Grand Prix, Percat will be one of 265 competitors in action at round two of the five-event Championship.

The 28 year-old will compete in the elite KZ2 class, where along with the top drivers from all across the country, he will be joined by his Dunlop Super2 Series team-mate Macauley Jones.

“I'm really looking forward to racing at Geelong. It's going to be enjoyable to race against the best young karters in Australia,” said Percat.
“It will also be pretty cool going up against Macauley. I'm not sure if Brad will be more nervous watching Macca or me!”

Rather than joining one of the major teams for the event, Percat will be pairing with good mate and 2011 Australian KA1 Champion Jake Spencer, who will be making his first start at the top level of karting for a number of years.

Percat believes the challenge of driving the high-powered KZ2 machines is a great training regime in between events in the Virgin Australia Supercars Championship.
“The beauty of racing the KZ is that the physical challenge is extremely high and getting every bit of speed out of them is a fine art,” said Percat.
“They certainly keep you sharp and ensure that you’re right on top of your game for when you climb back into the Supercar.

“I've managed to do a day of testing at Geelong before the event and think Jake and I could surprise a few.”

A total of 265 entries have been received across the nine classes, including reigning KA2 Champion Jack Doohan who has returned from Europe to compete.  Doohan will be one of 28 drivers in the elite junior class.

Drivers as young as seven years of age will be in action in the Cadet 9 class, where Ryan Tomsett will be out to continue his good form of late that saw him claim the opening round win on the back of his 2016 Championship victory.

Many Competitors and Teams will use this weekend to test at the Beckley Park International Raceway ahead of official practice beginning on Friday March 31.

Qualifying and the heat races will be contested on Saturday April 1 ahead of the finals on Sunday April 2.

The Beckley Park International Raceway is located on Geelong Road, Corio. Admission for spectators is free.