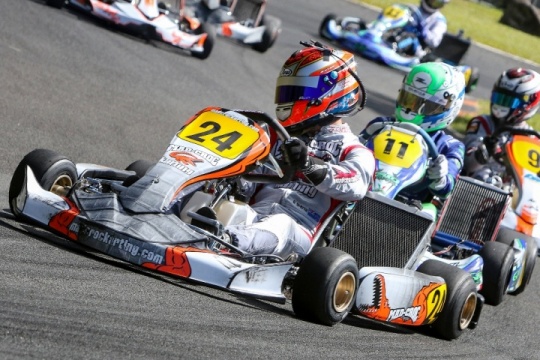 Press Release by: Kartsport NZ Inc.
ProKart's KZ2 classes delivered on their promise of close, exciting racing at the second round of this year's Molecule-backed series at Te Puke over the weekend.
"One of our guys who has been away for a bit and come back said it was just like the Nationals out there," said series promotor Steve Brown. "The numbers  (there were 24 entries in Wifiplus KZ2, 17 in the combined Aarque Group KZ2 Masters/KZ2 Restricted) help, particularly at a tight little track like Te Puke. But I also think that there's been a real step up in terms of commitment which you can see in how serious everyone is taking their racing these days."

That commitment came to a head in the KZ2 Final when fastest qualifier Dylan Drysdale and series stalwart and heat one winner Ryan Grant clashed as they disputed the lead.

Drysdale was excluded from the Final for his part in the incident but though Grant ended up classified 17th after completing only 21 of the 25 laps the Auckland ace scored enough points across the two days of competition to take a narrow (one point) lead in the series' points standings.

Young gun Aaron Wilson, also from Auckland, was tied for the lead with Grant going into the Te Puke but - after finishing fifth overall - now shares second place with top Australian KZ2 class driver Troy Loeskow, who - in another fillip for the local series - is committed to flying back and forth to do all five rounds this year.

With Loeskow relegated to 12th place for a driving infringement in the Pre Final that meant the battle for Final honours looked set to be between Drysdale and Grant. Which it was, with Grant having to use his years of experience to defend the lead, until their fateful clash on lap 22.

This left the way open for Graeme Smyth to claim his first race win of the round from Mat Kinsman, category young guns Taylor Harte from Tauranga, Caleb Huston from Rotorua and Mitch Brown from Auckland. (Loeskow was first over the line in the Final but received a relegation back to 6th place for a racing incident.)

In the other KZ2 class race, for the combined Aarque Group-backed Masters/Restricted field, Brett Hollander from Auckland qualified quickest and won the first heat. But in doing so he pulled a muscle in his neck.

Together with Speedway Super Saloon ace Terry Corin and fast local John Enticott, Hollander also found himself excluded from the second heat for passing under a yellow flag.

He started the third heat on Sunday morning but found he was still in pain from the pulled muscle and reluctantly sat out the Pre-Final and Final.

With defending class title holder Jared MacKenzie taking the plunge and moving up to the main Wifiplus KZ2 class, Round 1 winner Andrew Hunt from Auckland was more than happy to assume the role of driver to beat in the Masters category. the former rally driver winning the other two heats, Pre-Final and Final, the latter from Tim Loughran from the Hawke's Bay, and Enrico van der Griend from Auckland.

Mangakino's Graeme Lambert, meanwhile, made up for an opening series' round in Palmerston North in February fraught with problems to finish the Final in fourth place ahead of Rotorua's Darren Aislabie and Terry Corin.

Greater consistency across the class races, however, saw Aislable third for the round behind Hunt and Loughran but ahead of van der Griend, Lambert and Corin.

Finally, defending title holder Garry Cullum from Auckland continued on his winning way in the Aarque Group KZ2 Restricted race-within-a-race, though series new-face Shaun Anderson pipped him for pole in qualifying and fellow Wellingtonian Jamie Pollock beat him to the finish line in the third heat.

Gerhard Benadie also had one of his strongest ProKart Series weekends to date, the Aucklander qualifying fourth but getting better and better as the weekend went on for second overall place for the round and second equal with Regan Hall in the series points standings.

The Te Puke round at the KartSport Bay of Plenty club's Te Puke Auto Electrical Raceway was the second of five. The KartSport Rotorua hosts the third round of the Molecule ProKart Series at its track high in the Mamaku Ranges west of the city over the May 20-21 weekend.