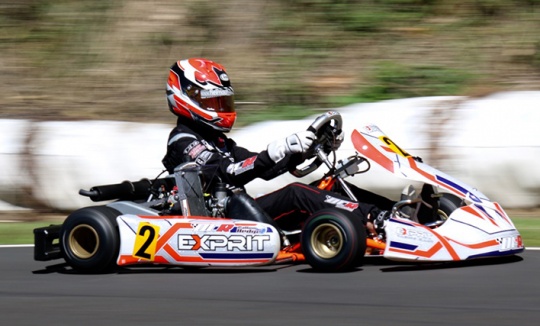 Hedge then went on to dominate the heat racing until Ryan Wood stepped up to take the Pre Final win from Hedge, Wright and Ashton Grant.

Hedge and Wood managed to run away from the field in the Final race leaving Wright having a rather lonely race.

The rest of the field had close racing with lots of passing going on from all the drivers.

The new push back nose cone caught a few out today but it sure looked like it will be a promising improvement for the class.

McCulloch, Cranston, Hart and Green changed positions all day but Bay of Plenty’s Corey Green was  able to take out the Final from Cranston and Sebastian Noble.

N-ZED Motorsport driver Daniel Bray was unstoppable today having a perfect day to dominate the DD2 class, with fellow Aucklanders Jono Buxeda and CJ Sinclair the next best, Sinclair taking second and Buxeda claimed third in the Final.

Female racer Tiffany Chittenden took pole position over Ryan Urban and Fraser Hart in DD2 Masters but it was Manawatu’s Hart who took the win in the Final from Chittenden and Urban.

Action in the Bay of Plenty continues in Sunday with the fourth round of the Giltrap Group-backed Rotax Max series.