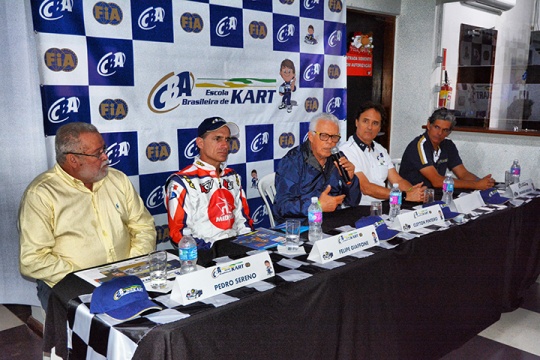 Author: Vroomkart International
The Brazilian ASN, the “CBA” (Confederação Brasileira de Automobilismo) wants to improve its motorsport roots with a karting school for young drivers, which is based on the FFSA model. Will they able to “bring up” a new Ayrton Senna?
After the Olympic Games in Rio, Brazilian authorities bet once again on sport, and in this case the Brazilian Automobile Commission bets on karting. What’s new? On December 16th 2016 the National Karting Commission presented a new karting school whose aim is to support the Brazilian motorsport from the base.

We talked to Giovanni Guerra, CBA & CIK-FIA delegate, about the Brazilian karting and its near future…

“It all started I 1959, when a pioneer called Cláudio Daniel Rodrigues saw a go-kart for the first time  in the USA. He brought it from America and started creating a karting environment here in Brazil. At first, the races were held in the streets in São Paulo, then in the 60’s the interest in karting grew, and the first Brazilian Team was created by Clovis de Morais, another innovative Brazilian driver.

The growth of Brazilian Karting was blocked when the Military Brazilian Govern stopped the importation of products and technologies. Despite this problem the creativity of Brazilian drivers was the solution for a new stage of local industry. Emerson Fittipaldi, Wilson Fittipaldi, José Carlos Pace and other motorsport legends started their careers in the scenario just mentioned before showing their talent around the world.

The 90’s set the stage for a new era of Brazilian Karting and an extraordinary relationship with CIK-FIA after the visit of former President Ernest Buser. Besides the European inspiration over our industry, all Brazilian products showed their potential through CIK-FIA homologation.
Brazilian Karting is so important that it was the starting point of motorsport journey of almost all Formula One and IndyCar Brazilian drivers including Ayrton Senna, Nelson Piquet, Rubens Barrichello, Nelson Piquet Jr., Lucas di Grassi, Helio Castroneves, Tony Kanaan, Gil de Ferran and many more.

What is the current situation of karting in Brazil?

“Brazilian Karting is very strong, modern, and capable enough to produce locally all equipment and parts needed for very competitive events. Numbers are the proof of this affirmation not only with regards to a big group of drivers but also for the self-sufficient industry.

There are more than 50 karting circuits here including the CIK FIA homologated Paladino Circuit. The Brazilian Confederation of Automobiles registered 1938 karting drivers for 2016 season and more 28 international licenses. The Brazilian Karting Drivers are divided into 13 categories from six-year-olds to forty-year-olds and over. We have four National Championships, three inter-state championships and more than twenty local championships promoted by the states, private promoters, and track's owners. Always for all the categories.

All rules on karting are the responsibility of the Commission Nation of Karting, from the Brazilian Confederation of Motor Sports, who approve the equipment. Currently we have nine kart factories, seven engine, eight carburettor, five exhaust and five tire factories working on the territory. The internal parts of engines are common among builders.”

What is the connection between karting, the others series and categories in Brazil?

“Brazilian karting is the main driver’s supplier for the Brazilian Motorsport, but we aren’t happy. The Confederação Brasileira de Automobilismo made a big effort to eliminate an existing gap for young drivers who step from kart to formulas: we have Brazilian Formula Three and Regional Formula 1.6, but we want to create a national Formula 4 championship in the near future.

True that we have categories like Brazilian Formula Three and Regional Formula 1.6, but we aim to bring out Formula 4 soon. Our biggest challenge is to offer our drivers this category in order to provide them the right way to the top level of motorsport. The other aim is to make our motorsport acknowledged: we cannot deal with the fact that we don’t have Brazilian categories pointed by FIA Ranking.”

How are famous F1 Brazilian drivers helping to promoting karting in Brazil?

“The 1981-1983-1987 World Champion Nelson Piquet heavily contributed by launching karting competitions with raffled engine, the same rule utilized these days by other promoters included the CIK-FIA (for the CIK-FIA Academy Trophy, relator’s note). Felipe Massa promoted the Karting Challenge of Stars, an event for famous drivers requested by the Massas, but it no longer exists. Rubens Barrichello is still a competitor in the karting competitions and the former IndyCar driver Felipe Giaffone and his family are the promoters of the 500 Miles of Granja Viana, an international event. For us this participation is good, but unfortunately it is not enough to draw more people to karting in Brazil.”

How do you see the future of karting in Brazil?

“I see a promising future for Brazilian Karting. Despite an economic crisis in Brazil, perspectives are good for the next years, including a huge participation of drivers and companies around the world. We are working hard to grow and draw foreign competitors too. We would like to host a CIK-FIA event again. We have all the support by the Confederação Brasileira de Automobilismo, but we need CIK-FIA to get closer to Brazil and the Americas, and with this opportunity we would surely improve the quality of international and national events.”

How can the business karting community help you in achieving your aims?

“We believe in a possible partnership between CBA and Brazilian karting companies to allow this karting to increase. For us it could be the perfect solution to grow both sportively and technically. We are looking forward to help drivers through great events, media, and resources for future development. Today in Brazil we have some very important tools for karting growth, one of these is that the Government have approved a law of tax benefits for companies who sponsor the sport. Together we will be stronger and more competitive.”

What are your initiatives for 2017 and future (long term) aims?

“We want to introduce all CIK-FIA procedures in Brazilian Karting very soon: homologations, race procedures and championships’ regulations. We are working hard to organise a meeting with CIK-FIA as soon as possible. We already started to work on this challenge: the Federation Cup will have the Academy format with the best drivers on grid from Brazil and our South American neighbours with the same technical conditions by CBA. We have just launched the Karting Driving School in Brazil as a tool to viability of karting for a bigger number of new drivers. The CBA will offer support regarding international approval of engine, chassis, security equipment (to prevent unsportsmanlike attitudes, a really revolution in the discipline). We want to get a CIK-FIA competition. This exchange will be an extraordinary opportunity for a real World Championship, with official races on all the continents.”


The project is an initiative from the Brazilian Automobile Confederation - CBA, together with the FIA ​​- International Automobile Federation. The Brazilian Kart School will follow the pattern of the victorious project used in France, the French School of Kart managed by the FFSA - French Federation of Sport Automotor and counts on the direct support of French Government. The school aims to encourage the entry of new drivers into national karting. All the didactic material, as well as teaching techniques and procedures, will follow exactly what has been used in France. In Brazil, under the supervision of Felipe Giaffone and Pedro Sereno, the Brazilian Kart School will initially be implemented in the states of São Paulo (Kartódromo Granja Viana), Minas Gerais (Kartódromo RBC Racing) and Santa Catarina, on a kart track to be nominated soon.

Any child between the ages of 6 and 11 may enter in the Brazilian Kart School. The promotion of the school will be done through electronic dissemination and distribution of flyers in regular schools. To register future pilots they must register on the website of the Brazilian School of Kart (www.cba-ebk.org.br) and will then be contacted by the closest school to their home.

In each of the classes the pilots will be submitted to flag training, rules of the sport, notions of karting, engine, carburettor, personal safety equipment, and finally practical classes on the track. At the end of each module the drivers will receive a diploma and, in the end when they receive the Golden Wheel diploma , they will be able to register in the official competitions.

Independently from the election of a new president and, consequently, a new board of directors for the CBA in 2017, the project of the Brazilian Kart School foresees a programmed expansion with the implantation of at least three more schools in 2017.

"We are very happy to announce the Brazilian Kart School. After my eight years in front of the CBA I feel that I really needed to leave something of importance to the next generations of drivers. With the full support of the FIA ​​we will plant a seed that, being well cultivated, will be able to offer in many parts of the country the renewal necessary for the success of our sport. Go-kart is the beginning of everything in Brazilian motor racing, and now we have the Brazilian Kart School. We are opening a way for our talents to start without the high cost barrier" said CBA president Cleyton Pinteiro