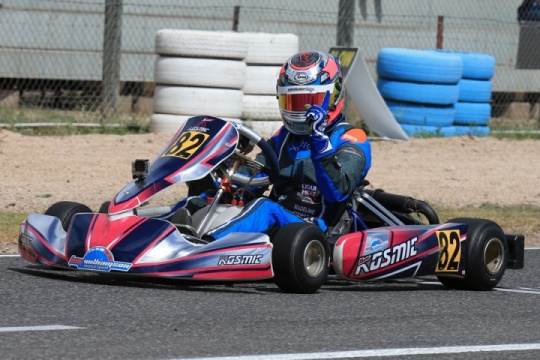 Press Release by: Karting Australia
History has been created at the second round of the Rotax Pro Tour in Adelaide with not one but two female racers taking victory in Rotax 125 Light and Junior Max for the first time ever.
No female has taken a win in the Rotax Pro Tour prior to Auckland’s Madeline Stewart taking the Rotax 125 Light Final this afternoon. It is the first time a female racer has taken a major karting event win in Australia for over 10 years. This was backed up in the equivalent junior class by Rianna O’Meara-Hunt – also from New Zealand – who won by nearly two seconds.

“It is an unbelievable feeling, we’ve been working so hard for this for a long time that it is emotional, a great feeling,” said Stewart. “We’ve been coming to Australia for a long time and love racing against this competition. The Tom Williamson Motorsport team have been so helpful to us that we can fly to Australia and everything is ready to go for us. To be the first female racer to do this in this series and the first in such a long time to win a major karting event in Australia is a huge honour and gives me even more confidence heading to the next round to carry on the good run of form.”

Queenslander Troy Morrissey came home second and Victorian Cameron Longmore third. Similarly O’Meara-Hunt pushed hard for her victory having come from fourth on the grid having to work her way past Harrison Hoey and pole-sitter and early leader Jac Preston.

In DD2, Joshua Car took a thrilling victory in his CompKart chassis, leading home TWM Kosmic racer Cody Gillis. Car moved past Gillis and early race leader Joshua Fife before opening a short lead. Gillis had to work hard to push past team-mate Fife and then set about chasing down Car. He ranged up on the rear of Car, however the young New South Welshman had enough to hold on.

In DD2 Masters, Queenslander Scott Howard took victory after a spirited fight with Daniel Richert. The race was halted in its original stanza when a sudden downpour made conditions too dangerous to race. Officials red-flagged the race before continuing it at the end of the day. Early race leader, Troy Woolston had a technical issue and pulled out of the continuation opening it up for BirelART chassis shod Howard. Richert pushed hard and kept Howard honest throughout the course of the race, while Novocastrian, Mark Flood was less than a second behind in his Formula K kart. Whilst at one stage it looked as though Flood and Richert were closing down on Howard he responded and brought home the perfect pointscore for the weekend having started on pole for the Pre-Final.

In the Junior Max Trophy class, Russell Mayo took the win over Ryley Watson and Amber Miller – completing a great day for the females of karting.

In Mini Max, James Wharton took victory in his Shamick Racing CRG over Hugo Simpson and Bailey Hazard. Jack Westbury crossed the line first however was excluded from the meeting post event for a technical issue.

In Micro Max Kristian Janev took the win in extremely wet conditions comfortably over Jake Rutkowski and Bradley Majaman. Harry Arnett, who had been dominant throughout the weekend was forced to watch the action from the side of the track after his Shamick Racing machine wouldn’t fire at the start.

The Rotax Pro Tour now moves to Ipswich in Queensland over the weekend of May 5-7.