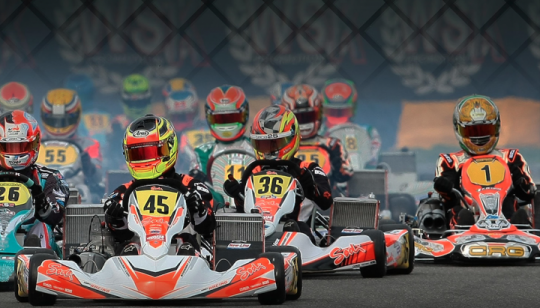 Drivers, manufacturers and teams taking part in the WSK events are heading south, towards Muro Leccese (near Lecce, Italy) for the second half of the season, which is starting next week. From 16th to 19th March, the most outstanding representatives of international Karting will be at the World Circuit La Conca for the third round of the WSK Super Master Series, which is achieving a good success thanks to an average number of 250 scrutineered participants recorded in the rounds of Adria (RO) and Castelletto di Branduzzo (PV). After the rain and the low temperature of the first two appointments, the setup of karts will need some adjustment in Muro Leccese, given that next week’s forecasts say it will be sunny and warm in South Italy.

On the 1250 metres of the Italian track, with one month to go before the final sprint scheduled in Sarno (Salerno), the standings are going to change dramatically, also thanks the incremental scoring system which awards a larger amount of points round after round, as provided by the 2017 regulations. The 3rd round of the season will be hosted by the circuit where the activity of WSK Promotion started in 2006. The final phase of the event on Sunday 19th March will be aired live in streaming on the official channel wsk.it. Broadcast will start with the Prefinals and will finish with the podium ceremony in the afternoon.

The new leaders of WSK standings.