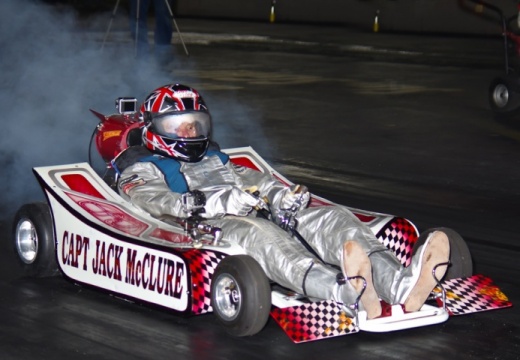 Author: Vroomkart International
If you think that KZs are fast and Superkarts are simply mindblowing, you shouldn’t read this article…
Written by Alessandro Roca

I was surfing on the web, reading and studying something about karting and motorsport in general when I came across a name: Captain Jack McLure, The Rocket Man. Who is he? Captain Jack was a guy who was used to drive his Rocket Powered Go Kart over 225 mph in the quarter mile in the USA. Was he crazy? No, he was an entertainer.

He was born in 1926 in Haywood County, North Carolina. He lived in Mooresville and when he was young he knew a guy that made moonshine, some of the best moonshine that money could buy, but he was living so close to a police department! Well, producing liquor during protectionism far less then a block from the police department wasn’t a great idea… Anyway, one day this guy asked Jack if he would start running moonshine for him. Those blokes were treating him very well every time he delivered a new batch of moonshine. “Are you hungry Jack?” and then they would go out and kill a chicken just so I would get a fresh home cooked meal. That was the North Carolina back in the days.

At the time there were a lot of guys that turned in to racecar drivers that ran moonshine for a liven: he got into many police chases in those days, but he has never did get caught. He would out run them every time they came after him.Then he moved to Columbia, South Carolina and started racing his 1939 Ford in what NASCAR called the Modified Sportsman Division. He raced with some of the biggest names in Stock Car Racing, Like Ralph Earnhart, Gale Yarborough, David Pearson, and Lee Petty. He raced in NASCAR from 1953 to 1968 but every year racing kept on getting more expensive until he walked away from it.

In 1959 he started racing Go Karts with West Bend motors on them I won 4 Championships so once my name got out there, he opened up a store called Jack McClure Racing Products. He sold Go Karts and other racing equipment. He put two west Bend racing motors on my Go Kart and took it out to the Orangeburg Drag Strip. That thing would go 100mph in the Quarter mile. The promoter said he would give he twenty-five bucks and a trophy if he would race a Super Stock, and if he beat the Super Stock he would give him a hundred dollars. That was the first time he was paid to race another vehicle. Later on he built a four engine a Kart with 4 West Bend engines that would easily go 125 mph in the quarter mile.

Ok, probably he was a little crazy: after he made the quarter mile run he would go down the return road at 80 to a 100 mph then in front of the crowd he would do a 360 degree spin and keep on going the return road: the crowd went crazy. But it wasn’t enough: he decided to put 6 West Bend engines on his kart, but the thing was so darn heavy it would not go much faster then with the 4 engines, and it just handled terrible, so he went back to running the 4 engine Kart.

The best is yet to come: one day Jack was reading a magazine and he saw an advertisement for a company called Turbonique, the company sold Rocket and Turbine engines. So he sent for a 8 mm film showing various applications of the rocket motors and this really sparked his interest so he called Gene Middlebrooks, the owner of Turbonique, and he told him he had the fastest Go Kart around, but he wonted to go faster. Gene said that if he puts a rocket on the Kart it would go faster and that he would be the very first person to put one of his rocket engines on a Go Kart. So he bought My Dart Grand Prix Kart down to Orlando, Florida and Gene installed a T-16 Rocket motor with 300 lbs of thrust. It took Gene about 3 days to finish it.

In March of 1963 he brought it to a racetrack up in Georgia, but the kart reached only about a 100 mph, so the track promoter wasn’t happy. He said “I hired you to go 125 mph” and he wasn’t going to pay Jack so he took his 4 engine West Bend powered go kart out of trailer and ran 125mph so the track promoter paid him.

Anyway he needed the Rocket Go Kart to go faster if he wanted to make money with it, so he went down to Florida to meet Gene and he said he should try two Rocket Engines on his Kart, so they added another T-16 Rocket Engine to the Kart. This was the first time that two Turbonique T-16 engines were fired at the same time. There was a small fire after the engines shut down.