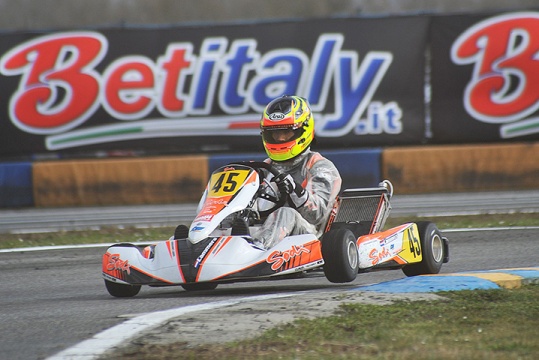 Press Release by: WSK Master Series
Standings change after the 2nd round of the WSK Super Master Series 2017: the leaders are Lammers (NL – Sodi-TM) in KZ2, Novalak (GB – Tony Kart-Vortex) in OK, Rosso (I – Tony Kart-Vortex) in OK Junior and Antonelli (I – Tony Kart-Vortex) in 60 Mini. Third round in La Conca, Muro Leccese (I) from 16th to 19th March.
The second round, hosted by the facility of Castelletto di Branduzzo (near Pavia, Italy), has deeply affected the standings of the WSK Super Master Series. New names, with very few exceptions, at the top before the third appointment scheduled from 16th to 19th March in Muro Leccese (I) at the World Circuit La Conca with more points to be awarded, according to the regulations.

Outstanding performance of the Dutch Bas Lammers (Sodi-TM-Bridgestone): thanks to a double victory in Prefinal B and Final he reaches 175 points and becomes the provisional leader, pulling down his team-mate Anthony Abbasse. The French driver only managed to score a 4th position in the Final of Castelletto, but he trails only by 14 points and still keeps a wide gap between himself and the French Jeremy Iglesias (Formula K-TM) and the Italian Marco Ardigò (Tony-Vortex), both at 86 points. 5th place, with 69 points, for Stan Pex (CRG-TM).

Novalak is the new OK leader.

Also the British Clement Novalak (Tony Kart-Vortex-Bridgestone) achieved a double victory in Prefinal B and in the Final, taking the leadership over from the Belgian Ulysse De Pauw (Kosmic-Parilla). They will arrive at La Conca separated by a very narrow margin (126 points to 119), with the Italian Lorenzo Travisanutto (Zanardi-Parilla) in third position with a gap of only 23 points from De Pauw, despite his unlucky final in Castelletto. The Finnish Paavo Tonteri (Tony-Vortex) put in a terrific performance and he is now 4th with 77 points, followed by the English Tom Joyner (Zanardi-Parilla) with 70.

Antonelli grabs the head in 60 Mini.

The Italian Andrea Antonelli (Tony Kart-Vortex-Vega), won the Prefinal B and the Final and grabbed the leadership with 122 points, ahead of the Russian Nikita Bedrin (Tony Kart-TM), 2nd with 120 points. The Italian Alfio Spina (CRG-TM, 104 p.) drops to third, followed by the Italian Luca Giardelli (CRG-TM, 79 p.), not very lucky in Castelletto, and by Gabriele Minì (Parolin-TM, 77 p.).