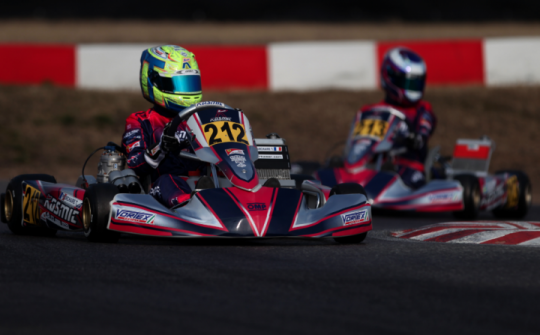 In OK class the Kosmic Kart "Blue" colour was always at the top, thanks to the performance of Théo Pourchaire and Karol Basz, who have struggled throughout the final for a place on the podium, gained by our young Frenchman, with a 3rd place. In the top-ten list there was also the Kosmic Kart-Vortex of Daniel Vebster, ninth, always fast and constantly in the leading group.

The brilliant performance of our chassis, and drivers, soon were clear since the qualifying heats, with the extraordinary pole position of Pourchaire, obtained with the record lap of 47"343, still the best lap of the event. During the heats we even got a double success (Pourchaire) and two third places (Pourchaire and Basz) in the "Super heats".

Very unlucky was Noah Milell’s final, forced to stop in the final in the very early stages of the race, who could not be able to express his potential. Definitely positive was the race of Hicham Mazou, entered the OK final smoothly and protagonist of a enthralling race, closed in sixteenth place.

Despite the 10th place in the final, Roman Stanek showed his full potential and how competitive is the material in OKJ.

Stanek won two heats and finished the "Super heats" in fifth place, performances that let us have good expectations for the future, also since this is Roman’s the first experience in the cadet class.

Even in the shifter category, KZ2, we had important moments and all the Racing Department’s technical staff has been working for the next international events, focusing on the development.

Hajek finished tenth in the final, remaining at the lead throughout the race and scoring the best lap of the race with 46,924.

For Rasmussen and Bengtsson the Winter has been a testing ground to increase their international experience, in view of the CIK-FIA commitments.