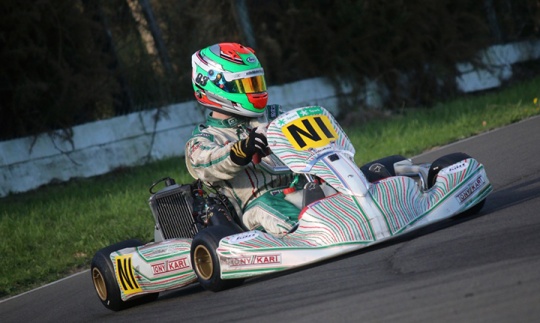 Press Release by: Kartsport NZ Inc.
Young Auckland driver Callum Hedge came back from disappointment on Saturday to celebration on Sunday at the opening double-header round of the 2017 Giltrap Group New Zealand Rotax Max Challenge at Palmerston North over the weekend.
The teenager was set for a clean-sweep of the ultra-competitive Junior Rotax class on the first day of competition at Manawatu Toyota Raceway on Saturday only to have a chain guard come off and be called into the pits while leading the Final.

It was a cruel blow but one Hedge took on the chin, coming back to claim an emphatic Junior class win on the second day of competition at the KartSport Manawatu club's track at Shirriffs Rd on Sunday.

With Hedge out of the Saturday Final,  the Junior Rotax class win at the first round went to Ryan Wood from fellow Wellington ace Rianna O'Meara-Hunt.

Wood also qualified quickest and won the first Junior Rotax heat race at the second series' round on Sunday but it was O'Meara-Hunt who finished second to Hedge in the Final, with Wood third and local driver Jackson Rooney fifth.

There was also drama across the two days in the DD2 Senior class. Auckland-based international Daniel Bray ended up the winner of both rounds, but it could have been very different had the track stayed wet for the duration of the Saturday Final.

Bray was the quickest class qualifier on Saturday and won both heats and the Pre-Final. However, like all but two the other competitors (Bond Roby and Ayden Polaschek) he was caught out on slick tyres when early drizzle turned to rain.

With their wet tyres Roby and Polaschek sprinted ahead and looked set for an upset…until the rain stopped and the track started drying.

That was all the invitation Bray needed, scything through the field to round up everyone including Polaschek and Roby for the ultimate come-from-behind victory. And first of two - as it turned out - for the weekend.

The multi-time NZ and former US champion didn’t have it easy though, young guns CJ Sinclair, James Blair and Jonathan Buxeda and veteran campaigner Josh Hart taking the battle to him on both days.

Sinclair was the star turn on Sunday, pipping Bray for the top qualifying spot in the morning before going on to win the second heat and Pre-Final.

Any hope Sinclair  had of adding the Final win to his second round tally were dashed, however, in a multi kart collision on the first lap which claimed him, Buxeda and top local Josh Hart. This left Bray to claim his second Final and class round in two days, in this case from James Blair, and Saturday wet track heroes Ayden Polaschek and Bond Roby.

Josh Hart was also a factor in the Rotax Max Light class at his home track, claiming a qualifying, heat, Pre-Final, Final clean sweep on Saturday. He them came back from qualifying P6 on Sunday to claim second places behind young guns Jacob Cranston (Ht 1 & Pre-Final)) and Caleb Cross (Ht 2) then third in the Final behind KartSport Manawatu clubmates Cranston and Michael McCulloch.

After getting on top of handling issues which held him back on Saturday, Sunday was a very different day for former Junior class champion Caleb Cross in Rotax Max Light. However late in the Final, after working his way from sixth to second place, a throttle cable failure put him out.

Wellington's Stewart sisters, Madeline and Ashleigh enjoyed mixed fortunes over the weekend. Both were quick in qualifying (Madeline second fastest on Saturday, Ashleigh second quickest on Sunday) but neither was 100% satisfied with their race pace on either day.

Despite that Madeline was fifth in the rain-dampened Rotax Light class Final on Saturday (Ashleigh had a dnf) and the pair finished fourth (Madeline) and fifth (Ashleigh) in the Final on Sunday.

Urban claimed a clean sweep of qualifying, the heats and Pre-Final and Final on Saturday and was only beaten to the finish line in one race (the Pre Final) by Fraser Hart.

Auckland's David Malcolm enjoyed an Urban-like start to his campaign in the new DD2 Super Masters (for drivers 50 yrs and over) class, qualifying quickest and winning all his races from Garry Claxton. Malcolm continued on his winning way on Sunday only to strike problems in the Final, gifting the race and second round class win to Tim Wakefield from Warren Parris and Claxton.

The Kartsport Bay of Plenty club hosts the third and fourth rounds of the 2017 Giltrap Group New Zealand Rotax Max Challenge over the March 18-19 weekend at Te Puke.