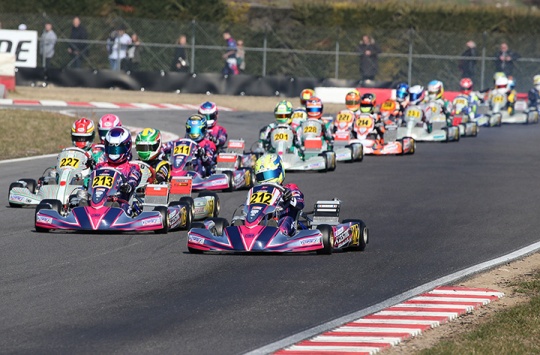 Author: Vroomkart International
Things are getting serious here in Lonato: heats are finished and drivers are looking forward to superheats and finals.
Written by Alessandro Roca

Jeremy Iglesias (Formula K-TM) shows a great pace, the one showed in Adria at the WSK, and wins all the heats in KZ2. The French driver will start superheats on pole position followed by the outsider Riccardo Longhi (BirelArt-TM), 2016 Trofeo delle Industrie winner. Third place for the 2016 KZ2 European Champion Fabian Federer (CRG-Modena Engines) who gets the better of Rick Dreezen (BirelArt-Vortex) in fourth.

The KZ rookie Antonio Fuoco (Tony Kart-Vortex) finds a good pace in this second day of heats and is able to pass into the next step, recovering the bad situation of yesterday.

Another Frenchman is at the front in OK and it’s the Kosmic driver Theo Pourchaire (Kosmic-Vortex), at his first year in the senior category. Lorenzo Travisanutto (Zanardi-Parilla) is in second position thanks to two victories. Second row for other two former junior drivers: Dennis Hauger (CRG-Parilla) and David Vidales (Tony Kart-Vortex).