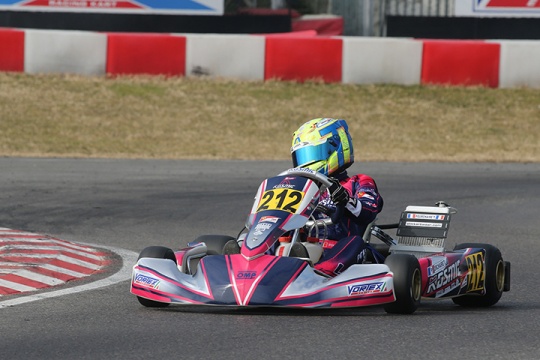 Press Release by: FM Press
The 22nd edition of the Winter Cup is scheduled for this coming weekend as a lot of international karting stars are present at the South Garda Karting in the four categories of the event. The first indications came from qualifying and initial heats.
The 22nd edition of the Winter Cup, race scheduled at the South Garda Karting circuit in the weekend of February 19th, confirmed the important entry figures with 276 drivers verified out of the 293 entered, and an excellent spectacle on track during qualifying held on Friday.

The entry list is exceptional in all the categories, with a lot of champions on track: 89 drivers made it to the track in KZ2, 57 in OK-Junior and a solid 75 in Mini Rok. The event has been blessed by an excellent spring temperature, which is quite strange for this classic early season race.

The French driver Jeremy Iglesias (Formula K-Tm-Bridgestone) has been very quick in the first qualifying of KZ2 and posted the pole position time in 46.745s which placed him on top of the absolute classification. He is followed by the reigning European Champion Fabian Federer (CRG-Tm) who was only 38 thousands of a second shy of him, and by the Belgian Rick Dreezen (BirelArt-Vortex) and Riccardo Longhi (BirelArt-Tm). The fastest of the second session was the British driver Ben Hanley (Croc-Tm) in 46.901s, but his time was the ninth quickest, while the best time in the third session was the 46.839s posted by the young Alex Irlando (Sodikart-Tm), who secured the fifth absolute place. Sun has played a major role in the first session as it raised track temperature more than in the following sessions that were conditioned by cloudy weather. Last year’s winner Marco Ardigò (Tony Kart-Vortex) was sixth absolute, and was followed by reigning World Champion Paolo De Conto (CRG-Tm) and his team mate Flavio Camponeschi (CRG-Tm). Former European Champion Andrea Dalè (CRG-Tm) finished in the top ten. Antonio Fuoco run a great day as he was 12th absolute, closing the third session in third place on Tony Kart-Vortex. He has been back behind the wheel of a kart in a weekend free from other commitments connected to his motorsport career.

The high competitiveness of the crowded Mini Rok – the Vortex single make engine category – was confirmed by the fact that Dmitry Ignatov (Energy-Vortex-Bridgestone) and Brando Badoer (Tony Kart) posted the very same quickest time in 55.562s, while Bray Benneally (Energy) was only a thousand of a second short of them in 55.563s.

The first heats have taken place in the afternoon and will continue on Saturday. Entry fee for spectators is 10 Euros.

The winners of the heats run on Friday February 17th follow: