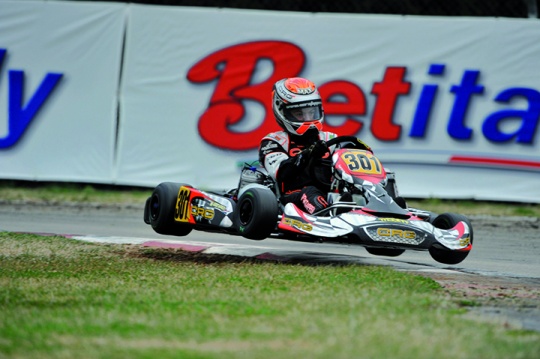 Author: Vroomkart International
Sure he’s still only 15, he’s yet to grab a major CIK title – though he’s been a top contender of the past three years – but Max Verstappen has started the 2013 season in superb fashion, taking a dominant win at the Lonato Winter Cup and proving nigh unbeatable in the WSK Euro Series first three rounds. Is this going to be the right year for the fast Dutch star? (May 2013)
written by Salvatore Murtas.

According to almost everyone in the paddock (the one writing included) Max Verstappen is one of those drivers with a very bright future ahead. Although only 15, during his 7-year long career in motorsport he’s proven day in day out how fast he can be. Possibly one of the most naturally gifted drivers around, one you would define a talent. His start to the 2013 season has been phenomenal, with four events won out of six raced, and the lead in the WSK Euro and Master Series standings.

Your blasting start of the season is quite remarkable, you’ve always been very fast but you seem a lot more pragmatic than in the past.

“True, so far everything has gone very well. The material has been great so far, I’ve raced at my best all the time and I’m very happy with the results.”

In the last WSK race in Sarno you had some technical problems. Can you tell us what happened?

“In the second heat I burnt the clutch because we had a restart, and then in the  nal we had a problem with the spark plug, the same we had last year in Las Vegas as well, but it’s  xed now. We’ve changed spark plugs and from now on it should be better.”

Who’s the toughest driver to beat in KZ1?

“Difficult to say, but if I had to name one I’d say Ben Hanley. He’s been very consistent so far in the WSK and I expect him to be a tough opponent for the rest of the season.”

Do you have any new parts or modifications on your equipment for the next race?

“Yes, we have something new for the chassis which we hope it’s going to work properly over the racing weekend.”

Despite having yet to land a major CIK title (titles vanished mainly to over-eagerness, bad luck, lack of experience or simply impatience, like the World Cup for KZ2 in Sarno last season where he was by far the fastest man on track) Max has to be your favourite kart driver for his dedication to the sport. From a very young age, Max has shown his talent as well as his passion for the sport. Starting in the Dutch and Belgian karting series in 2005 in Mini Max and Cadet categories, Max moved on to the international stage as soon as he turned 13, in 2010. And from then on he collected an incredible series of victories and success, with 5 titles in the various WSK series and 2 runner-up titles in the CIK World Cups (one in KF3 in 2010, the other in KF2 in 2012). And more likely to come in 2013. But Max has also known defeat, mistakes and the hard process of leaving disappointments behind and learning from them. Like the 2011 World Cup for KF3 where he started the final from 2nd and closed down the field (2011 has to be Max’s annus horribilis in karting, with several international events ending in defeat); or last season, when he made a mistake in the early stages of the final of the World Cup for KZ2 in Sarno and went from a potential title to a bitter end. Or even the disheartening experience at the SKUSA Supernationals in Las Vegas, where he was forced into retirement for a technical issue while leading the final. Nevermind. Max took it all in, and moved on. Always fighting, like a true gladiator.

What has changed from last year when you missed the World Cup title and this year, which you started in dominant fashion?

“Last year I haven’t been very lucky, I was always running on the front but didn’t manage to get the results I could have potentially aimed for. But for sure after the demise at the World Cup for KZ2, where I was fastest all weekend and made a mistake in the  nal, I’ve also learnt to be calmer and not to rush things too much.”

Most youngsters dreaming to land an F1 seat one day would have taken advantage of his famous father (for those who don’t know, Jos Verstappen, Max’s father has raced in F1 from 1994 to 2003 for a total of 107 Grand Prix and 2 podiums) and his contacts to leave karting as soon as possible. But not Max. He could have easily decided to step up to single-seaters, as many former kart drivers have done in the past, but no! Max wants to win, and do so against the best. And this is what’s most exciting. Not winning for the sake of it, but trying to do it in the old fashion way, by beating the very top drivers in the sport. Like the legendary names of the sport, starting from Senna, Fullerton, Wilson, Trulli, Fisichella, Verstappen, Rossi, Manetti, Foré, Ardigò, Thonon (the list is endless!) have done before him. In the true spirit of competition. Something which his famous fellow driver and compatriot, the dominant 2-time World Karting Champion Nyck de Vries (just to name one) didn’t do.

Why did you move up to KZ instead of staying in KF for another year? Do you think racing against the best kart drivers in the world is helping you become more cool-headed?

“Yes, of course the KZ  eld is very competitive. Not only there are a lot of very talented drivers to  ght against, and some of them with World and European titles to their credit, but they also have huge experience, and this forces you to give your 200% at all time, focusing on tactics as well as speed and avoiding silly mistakes. Plus I enjoy shifter karts a lot more, and it will be useful when I move up to formulas.”

You’ve had some ups and downs last season. Which was the best race in 2012?

“Definitely the World Cup in Zuera, where Crg  nished in the top four positions. I managed to grab 2nd after the very disappointing weekend in Sarno, and I proved myself. I was always up front, I made no mistake, no contacts, I had a clean weekend and the result was simply fantastic.”

Looking at the current season, together with two of your team mates you will be racing in Castelletto at the Rotax Euro Challenge. So you’re back to your roots...

“Yes it’s true, we want to show that Crg karts can win also in this championship, as we’ve seen a dominance of Tony Kart drivers recently. It’s been some years since my last race in Rotax, but I don’t mind the class as long as it’s racing. The Euro Challenge is a high level championship with some very good drivers. I know some of them, and I’m sure it will be fun."

Is this going to be your last season in karting?

“No, I think I will stay in karting one more year and then move on to single-seaters, but it’s still early to say. I’m still 15, I’ll be 16 in September and I’m yet to do my  rst test with formula cars. So there’s plenty of time to win more titles in karting.”

Renè Lammers: «I want to be consistent and get the best result»