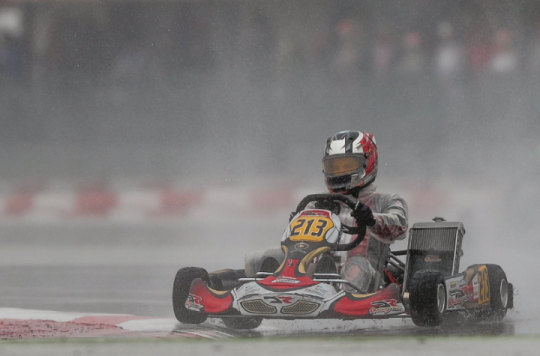 Press Release by: DR Racing Kart
In a race that took place in extreme wet conditions from day one and continued with non-stop rain until the end, our team didn’t give up for a single moment and eventually was rewarded with an incredible 4th place in OK from Justas Jonusis, just one place off the podium, and with a top-10 result in KZ2 with Maximilian Paul.
Our team was launched its challenge for the 243-driver field of the opener of the WSK Super Master Series at Adria International Raceway with six drivers: Maximilian Paul (KZ2), Laszlo Toth (KZ2), Moreno di Silvestre (KZ2), Justas Jonusis (OK), and the brothers Adrian and Alex Schimpf (OK).

Conditions from day one had been very difficult with extreme rain presenting everyone some serious driving and setup challenges, which affected also our team. In OK qualifying practice our drivers managed a 22st (Justas Jonusis), 39rd (Adrian Schimpf) and 42th (Alex Schimpf) positions, while in KZ2 it started even more difficult with a 27th (Maximilian Paul), 36th (Moreno di Silvestre) and 33th (Laszlo Toth).

Our drivers and team however didn’t give up for a single moment and worked tirelessly throughout the weekend to recover the lost space. Saturday already the results were much different: Justas managed to go up to 7th and 10th positions in two of the three qualifying heats, only for an unlucky 18th to hamper his progress, while Alex and Adrian also battled and improved their positions. Similarly, Max, Moreno and Laszlo improved their speed and pushed for positions in the qualifying heats.

In the meantime, while the weather deteriorated, several qualifying heats were postponed from Saturday night to Sunday morning, and all the pre-final and final races were shortened for safety reasons. That meant that our drivers – still not secured their place in the final race – had to continue battling through a longer Sunday and even more extreme weather conditions, while they’d have much shorter race distance to make their final position.

Come Sunday, all drivers showed their best driving on the track, with Justas qualifying to start the Final race from 11th on the grid, with Adrian 21st in OK. In KZ2 max would start in 22nd position, and Laszlo 33rd.

Final races started in very poor visibility from the water spray, and the rain getting heavier, while the later starting times in the day meant it was also getting darker. In these conditions, and while most top drivers made mistakes, Justas showed blistering speed setting the second fastest lap of the race and moving 7 positions up to finish 4th in this star drive in OK, and both KZ2 drivers gained 11 positions from their start to finish 10th and 22nd, showing the massive performance gains that the team achieved during the weekend.

The team now moves forward to Lonato for the Winter Cup in less than two weeks’ time, before resuming the WSK Super Master Series in Castelletto shortly after.