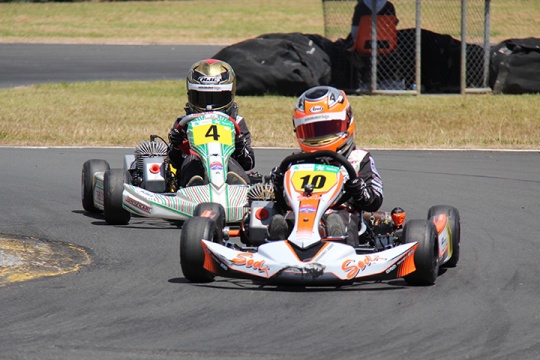 Press Release by: Kartsport NZ Inc.
Mason Potter from Auckland and Emerson Vincent from Pukekohe got their 2017 ROK Cup NZ campaigns off to winning starts at the opening round at the KartSport Auckland club's very well supported (112 competitors) Microbe Cars sponsored City of Sails Two-Day Challenge meeting over Auckland Anniversary weekend.
Potter, who finished second in class in the Cadet ROK category last year, only won one of the five Vortex Mini ROK class races over the two-day meeting but he was second in two of the other four and finished no lower than fourth, giving him a crucial advantage when three-race winner Ayrton Williams ended up 16th in the final.

With key players in last year's title fight having move up an age bracket to the Vortex Mini ROK class, Emerson Vincent stepped up to the plate in Cadet ROK, winning four of the five races and finishing second in the other.

The only other race winner, Ashton Phipps, ended up second  after a countback with Tom Bewley, and South Island champion, Louis Sharp, was fourth.

Rhys Tinney, meanwhile, stepped up with a win in the Pre Final and podium spots in the other four to claim overall KZ2 class honours from Taylor Harte and Logan Brown.

Three wins from five starts were enough for Lee Sefton to get the better of Richard Macey and Mark Ongley in ClubSport 120, and for Ashton Grant to beat the cream of the country's emerging kart talent to take top Rotax Max Junior class honours from former ROK Cup NZ class winners and New Zealand representatives, William Exton and Joshua Parkinson.

ROK Cup NZ action now heads south with the second round of the 2017 series being run in conjunction with the annual KartSport New Zealand Sprint Nationals meeting, this year being hosted by KartSport Southland at Invercargill over Easter Weekend.

The event was the first big one for the new Dunlop DFH and Vega XM (KZ2 class) control tyres. Competitors generally gave both new tyres very favourable reports with a number of lap records lowered and/or closely matched.

The competitive life of the Dunlop DFH was particularly impressive.