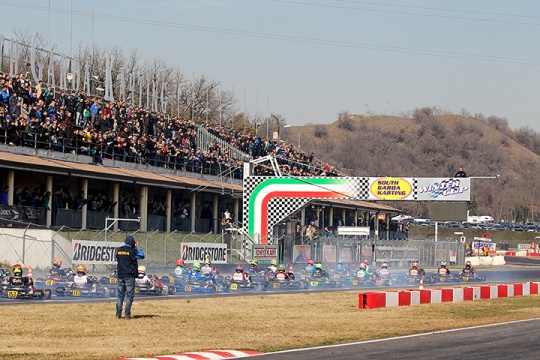 Press Release by: FM Press
The circuit South Garda Karting of Lonato will house the 22nd edition of the Winter Cup next 17-19 February. The race announces to be quite packed with drivers once again, as 250 top drivers are all set to make it to the track in the various categories. The queen category KZ2 will see 80 drivers on track, including several champions.
The 22nd Winter Cup is scheduled at South Garda Karting next 17-19 February. All categories from Mini Rok to OK-Junior, OK and the most powerful KZ2 will have quite packed starting grids, with the presence of the main teams and strongest protagonists of International karting.

The total number of entered drivers is heading fast to level 250, figures that confirm the success of this event, that is one of the landmarks of the early international karting season.

Category KZ2 will certainly produce a lot of spectacle. About 80 drivers will challenge each other on track, among which CRG’s World Champion Paolo De Conto and several other champions of the likes Tony Kart’s Marco Ardigò, Bas Lammers of Sodikart, Davide Forè of Gold, just to name the ones having the highest number of titles under their belt. Other champions and strong interpreters of the circuit of Lonato will make it to the track too, such as the young Luca Corberi and Matteo Viganò (Tony Kart), Patrik Hajek (Kosmic), Andrea Dalè, Fabian Federer, Flavio Camponeschi, Simo Puhakka e Mirko Torsellini (CRG), Ben Hanley (Croc), Tommaso Mosca and Alberto Cavalieri (Maranello), Jérémy Iglesias (Formula K), Tom Joyner (Zanardi), Felice Tiene (Birel), Anthony Abbasse (Sodi), and also Alessio Lorandi who has recently been a protagonist in Formula 3 and GP3.

Mini Rok will see the presence of a high number of drivers, as several emerging talents are ready to shine on one of the most famous circuits in Europe. The 22nd Winter Cup will also kick off the Rok Challenge 2017 for Mini Rok.

All categories will fit Bridgestone tyres, rubbers that will be checked by the new barcode scanning system of the circuit. Entry lists are still open and subscriptions can be made at www.southgardakarting.it, entry fees must be paid by credit card.