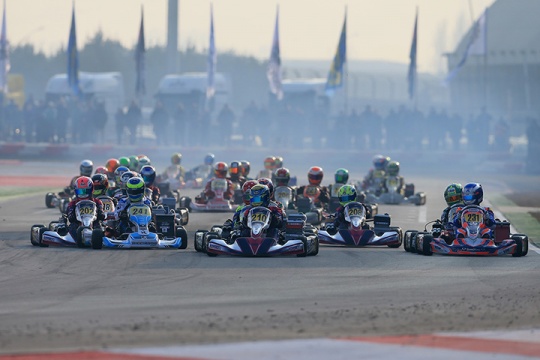 Also for this 2017 season, WSK Promotion proposes the four rounds of the WSK Super Master Series. The first round is scheduled for next weekend and all the fans of kart racing are eager to read the names of the drivers occupying the first positions of the standings. The venue of the first round is the Adria Karting Raceway, which has just hosted the 2017 season-opener last weekend: the WSK Champions Cup. The single round event managed to attract 250 entrants and next race, too, can boast a list of 250 drivers in the four categories admitted to the competition: KZ2, OK, OK Junior and 60 Mini. Therefore, this first part of the season has gathered 500 entrants in the two opening events.

The standings of the WSK Super Master Series will start to take shape since the heats on next Friday thanks to the new regulations which awards points in the qualifying heats as well as in the Prefinals and the Finals on Sunday. The whole point awarding system is incremental: the total amount of points will increase round after round with the highest number of points awarded in the fourth and last event of the Series. Within this new context the Spanish Pedro Hiltbrand (Tony Kart-Vortex-Bridgestone) in OK, the Dutch Stan Pex (CRG-TM-Bridgestone) in KZ2, the Russian Ilya Morozov (Tony Kart-Vortex-Vega) in OK Junior and the Italian Alfio Spina (CRG-TM-Vega) in 60 Mini, who grabbed the victory last weekend, are ready to be challenged again.

The races in Adria live in streaming on Sunday 5th February.

Another appointment on video from Adria thanks to the live streaming produced by WSK. The broadcast will be available on the web on 5th February. On wsk.it, fans will be able to enjoy the streaming of the final phase of the event: from the Prefinals on Sunday morning to the Finals in the afternoon.