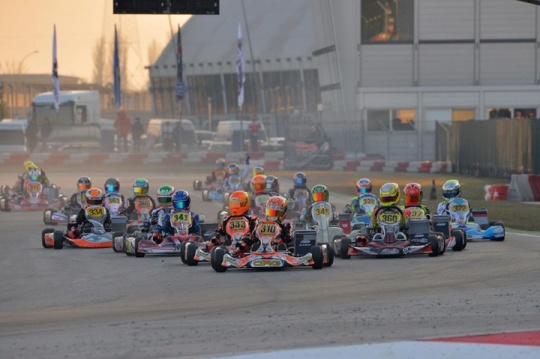 Spaniard Genis Civico (Croc Promotion-TM) leads the first prefinal of the junior category right from the start, but in the second part of the race runner up Baby Race’s Andrea Rosso (Tony Kart-Vortex) closes the gap with the leader, leaving the third more than 2 seconds behind him. The fight for the lowest step of the podium sees Leonardo Marseglia (Zanardi-Parilla), Henrion Gillian (CRG-Parilla) and Marius Zug (CRG-Parilla) swapping position during all the race.

On the last lap Andrea Rosso etter of Genis Civico, who cuts the penultimate corner and hits Rosso, who is forced to retire with the win in his hand. The win goes to Marius Zug followed by Gillian Henrion and Jose Gomez Gutierrez (CRG-Parilla).

After the start, Ilya Morozov (Tony Kart-Vortex) tries to get away from the pack while Giuseppe Fusco (Evokart-LKE) and Pavel Bulanstsev (Tony Kart-Vortex) fight for the runner up position. On the second lap, Fusco takes the second spot and he immediately overtakes the leader sliding into the inside line, great move! Morozov re-takes the lead ahead of Fusco and Bulantsev, and it starts a three-karts fight with drivers continuously swapping positions. Frenchman Evann Mallett (CRG-Parilla) finds some serious speed and jumps into second spot behind Morozov, but he throws it away spinning just few corners later.

On the final part of the race is a huge battle for the lead with the two Russian, Morozov and Bulantsev, drivers and Fusco crossing the line in this order.