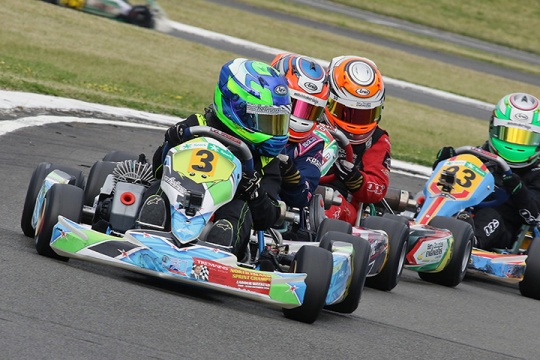 Press Release by: Kartsport NZ Inc.
Hosting the opening round of this year's ROK Cup New Zealand has provided an entry bonus for the kart club behind the annual Microbe Cars supported City of Sails Two-Day Challenge meeting, KartSport Auckland. With 112 entries across seven classes the two-day challenge meeting will be the biggest since 2007.
Of the seven classes being contested this weekend, the ROK Cup NZ ones are two of the best supported with 25 nine-to-13-year-olds entered in Vortex Mini ROK and 14 six-to-11-year-olds signed up for Cadet ROK.

One of the main reasons is the prize pool - trips to the ROK Cup International Final in Italy in October this year for the series' winner and runner-up in the Vortex Mini ROK class, and a new Vortex Mini ROK engine for the winner of the Cadet ROK series.

Also well supported is the Junior Rotax Max class with 22 entries, and the Senior Rotax Light and KZ2 classes with 18 and  19 entries respectively.

In this case the reason is timing, with both the 2017 New Zealand Rotax Max Challenge and 2017 ProKart Series set to kick off in Palmerston North in a fortnight's time the City of Sails meeting provides a perfect shake-down opportunity. The event is also the first for drivers to come to grips with the new control Dunlop DFH tyre introduced for most classes on 1 January.

Reigning South Island class champion Louis Sharp from Christchurch will be one of a number of youngsters to look out for in the Cadet ROK class races over the weekend. Emerson Vincent from Pukekohe will also be one to watch, as will Tom Bewley from Hawke's Bay and Sebastian Manson from Auckland. South Island Cadet ROK drivers Jaxon Harvey, James Black (both from Dunedin) and Ollie Workman (Nelson) are all making their first visits to the Giltrap Group Raceway.

Kaden Probst from Auckland and Asten Addy from Hamilton will also be contenders.

William Exton, in turn will be one of a number of talented youngsters keen to make their mark in the Junior Rotax Max class, while Daniel Kinsman and Dylan Drysdale are expected to battle it out at the front of the Senior Rotax Light class.

It’s hard to look past perennial class pace-setter and multi-time ProKart Series champion Ryan Grant in KZ2. The Aucklander is certainly not lacking challengers, however, this weekend sharing a 19-strong grid with the likes of Rhys Tinney from Hamilton, Taylor Harte from Tauranga and Mat Kinsman and Logan Brown from Auckland.

There will be action on track at KartSport Auckland's Giltrap Group Raceway in the Rosebank Domain adjacent the Avondale motorway off-ramp on both days with qualifying and three heats per class on Saturday and Pre-Finals and Finals on Sunday.