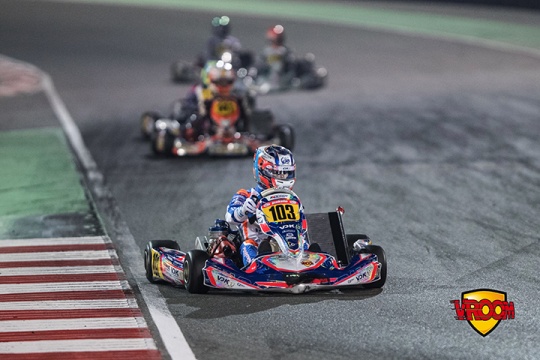 Press Release by: FIA Karting
The 2016 vintage of the CIK-FIA World Junior Championship was particularly intense and full of adventures. The end result however distinguished one of the great revelations of the season, Victor Martins, joined on the podium by two other promising young talents, David Vidales Ajenjo and Theo Pourchaire.
The tone was set in all four Qualifying Practice sessions. The 97 young Junior Drivers aged 13 to 15 used complex and sometimes risky strategies to try to take advantage of the good slipstream. The struggle that had just started was a tough one. The framework of the CIK-FIA World Championship lent itself perfectly to this fierce struggle for the world title. Fast, hilly, technical, the Bahrain International Kart Circuit used its ultra-powerful lighting to make the many Night Races exciting and safe. High-quality organisation and strong involvement from the Bahraini authorities complemented the very positive results of the first CIK-FIA World Championship in the new OK-Junior category.

Vidales Ajenjo and Martins followed each other after winning their Prefinals, while European Champion Finlay Kenneally (FA Kart / Vortex / Vega) entered the top five. But the final duel was only between Vidales and Martins. De Castro Petecof and Kenneally took advantage of the intense battle to take the lead for a short time. Then Vidales Ajenjo took control until Martins finally settled in the lead at the halfway point. Vidales Ajenjo fought in the chasing pack to regain his 2nd place against Petecof and the Frenchman Théo Pourchaire (Kosmic / Vortex / Vega). Martins won an indisputable victory and the World Junior crownahead of Vidales Ajenjo and Pourchaire.

Victor Martins' meteoric progress at the international level from the start of the season has attracted a lot of attention. On aperfect debut in OK-Junior, the Frenchman was quick to mingle with the best then stole the show with his series of three consecutive CIK-FIA victories. He started by winning the CIK-FIA European Championship Competition at Portimao (PRT), before repeating it at Genk (BEL), which opened the doors to the top three in the overall standings. This accomplished athlete completed the most important achievement in Bahrain by winning the CIK-FIA World Junior Championship with a renowned private team, VDK Racing.

Victor, what has happened during your career in Karting?

"I discovered Karting belatedly forfunon holiday at the age of 11. Until then, I had competed in gymnastics and I was even French Champion. Karting got to me from my first laps. The professionals immediately saw I had a good shot, so I started racing. I am lucky to be supported by my elder brother, Nicolas, who follows me as a mechanic, and especially advises me constantly."

Did you continue to practice sport?

"I have always considered Karting to be a sport in its own right, which means that I train physically and mentally all year round with competent coaching. This preparation has contributed to my success in OK-Junior this year. I saw some drivers who suffered from the heat in Bahrain or injured their ribs while I felt perfectly fit throughout the Competition."

What were the important points of this World Championship?

"First of all the circuit of Bahrain is magnificent, it is the best of the year, although it is difficult to master well. It was not easy to make my place in the Junior field. After the surprise of my first wins, I felt that my competitors were determined not to let me win the World Championship. The Qualifying Heats were pretty tough, but I never got discouraged. I was totally determined to win the Final and I fought for that title. Thanks to VDK Racing, I had the machine for it!"

What is your future as a Driver?

"Nothing is yet decided, because winning a World Champion title changes the situation. I want to race in single-seaters, that's for sure, but I don't want to rush. I have progressed well in Karting this year and I know I still have to develop. I would love to be able to take part in a good season in OK next year before preparing my move to cars."