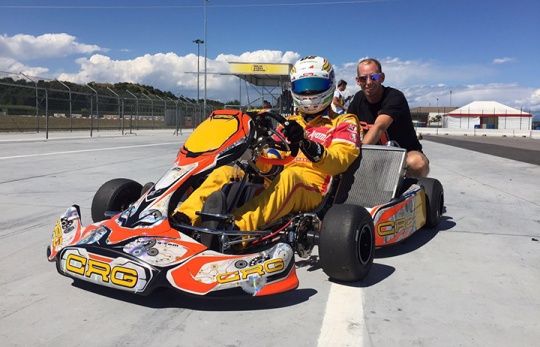 Press Release by: FIA Karting
Since his beginnings in karting from the age of 7, Antonio Giovinazzi has managed to win in every category he has raced in.
The quick and talented Italian flourished in teams like Top Kart and PCR, with whom he soon became a leader at the highest international level. His involvement and success in KF-Junior, and in the elite of KF, gave him a lot of maturity. In Formula 3 his talent has literally come to light. A Vice European Champion and winner of the Masters of Zandvoort, Antonio Giovinazzi proved impressive in GP2, second of the 2016 championship at the age of 23, in his first year in the waiting room of Formula 1.

Where does your passion for motorsport come from?

"It all started when my father gave me my first kart. I was not even 4 years old! We were going to drive every weekend at the track, I had a lot of fun. I was very happy when I was able to take part in my first race at the age of 7 years."

What are your best results and your best memories of karting?

"My victory in the 2006 60 Mini National Trophy remains a highlight because it was my first big result at this level. I also have a wonderful memory of my success in KF in the WSK Master Series 2010 as it allowed me to be integrated into the PCR team as official driver. We had a very good season in 2011, with the key being a 3rd place at the CIK-FIA World Cup in KF."

How was your transition to cars made?

"The meeting with the Gelael family during my last year in karting was a key moment. I have benefited from the valuable assistance of KFC Indonesia. I started racing in Asia and I won the "Formula Pilota China". I can't thank him enough for the support he gave me up to the GP2 title won in 2016. I am not forgetting my family who have supported me all these years."

What are your current projects?

"Many young drivers have the ambition to one day race in Formula 1. It is also mine and I will continue to give everything to achieve this goal. However, we must not forget that the most important thing is to become a real professional Driver."

Now that you are in cars, what do you think you have gained from karting?

"It is undoubtedly the best discipline for training a Driver. Almost all great champions started with karting, it is not random. We learn so much, especially to fight continually on track to be the best, and to develop a methodology to solve set-up problems."