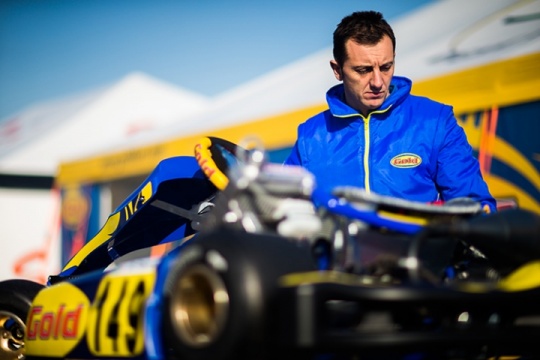 Press Release by: FIA Karting
A Quadruple world champion, and three-time winner of the World Cup at the age of 42, the Italian Davide Fore is the most successful driver currently active, always animated by an unquenchable thirst for victory after a more than 30 year career. He has a new challenge this year by joining the racing team of the Righetti Ridolfi factory under the brand Gold. Still determined to win races in KZ, he also shares his extensive experience with his team and actively contributes to the evolution of the equipment
What goals motivated you to start your collaboration with Righetti Ridolfi?

"Everyone knows that I'm still here to win races. But this time, I am giving my experience to a young team that trusts me. So I bring them all the information needed to update the equipment. Some teams invest in complex data acquisition systems and process a lot of information to understand the functioning of their equipment. This does not necessarily replace the experience of a Driver. The feeling of a good Driver is irreplaceable and I really like this role. When I won a race with Gold this year in Germany, my joy was even greater, not justbecauseIdrove well. It was the reward of a long process of testing and development carried out with the team members. It's very different and it's even better!"

What is your view on the karting today?

"I had the chance to experience the golden age of Karting in the 90s and early 2000s and it was fantastic to see so many Drivers racing. The battles were beautiful. But Karting today remains an extraordinary discipline. We use less technology than in Formula 1, but for me, the level of competition in KZ is higher than F1. The best drivers are here! The racing is much tighter, the differences are very small, the teams are constantly developing, working hard and the drivers are fighting for hundredths of a second, it's amazing! Of course, the ultra-modern factories, magnificent Competition awnings that we see in the paddock, all this is expensive. Before, there were many very good drivers in the factory teams. Now, there are one or two professional Drivers, but as budgets are very important, we must also take pay drivers. The consequence is that the general level is no longer the same as selection by money is more widespread than before. Just watchthe races carefully. It's a shame, but there it is."

"Recent guidelines from the CIK-FIA with the generation of the OK engines are good, and the KZ is fantastic. But it's not just us, the public is no longer at the tracks. I would like to see races with a lot of drivers and spectators, I want more publicity, media coverage. Karting deserves to be much more popular, TV should be present at each race. With this, the teams and drivers could bring in partners able to support them financially which would change everything! The entry of Rubens Barrichello in the World Championship at Kristianstad was a very good thing for Karting. The Driver who impressed me at Tony Kart in my early days was Jarno Trulli, and then there was Lewis Hamilton, Fernando Alonso, Jules Bianchi of course, and lately Max Verstappen and Charles Leclerc. Today drivers like Pedro Hiltbrand have real talent. This should interest the media and reach the general public because they are true heroes of the sport! I think the main issue for the future of karting is there. We have all the elements to attract spectators and sponsors, so let's go!"