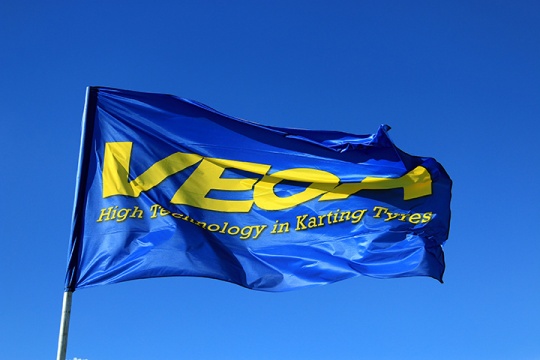 Press Release by: DKM
Long-time partnership continues.
Italian tire manufacturer Vega is going to stay the sole supplier of the four grade series of the German Kart Championship in the 2017 season as well. In an extensive bidding process, the total package Vega offered was crucial to the decision of the people responsible at the DMSB.

Before the beginning of the season, the DMSB already published the call for proposals regarding the assignment of a tire supplier for the year 2017. For the first time this was announced for each individual class and only for a year. In the end, the people responsible at the German Motorsports Foundation picked Italian manufacturer Vega. During the past years, Vega already equipped the four grade series DKM, DJKM, DSKM and DSKC.

After thorough checks of the different offers, Vega stood out with an attractive total package and is going to stay a strong partner of the German Kart Championship in the year 2017 as well. The tire mixtures for the classes also remain the same according to the CIK-FIA specifications. The DKM (OK) starts with Vega XP Prime, the DSKM (KZ2) and the DSKC (KZ2) starts with Vega XM Prime, the juniors of the DJKM (OK Junior) with Vega XH2 Option. All four classes of the German Kart Championship will be start with Vega W5 rain-tires.

At the beginning of May, the kick-off to the German Kart Championship is going to take place in Bavarian Ampfing. After that the drivers are going to travel to Kerpen and then, if the final approval goes through, to the Hunsrückring in Hahn for the half-time event. The second half of the year then holds two highlights: The semi-final at the Prokart Raceland Wackersdorf and the big finale at the end of October in Italian Lonato.