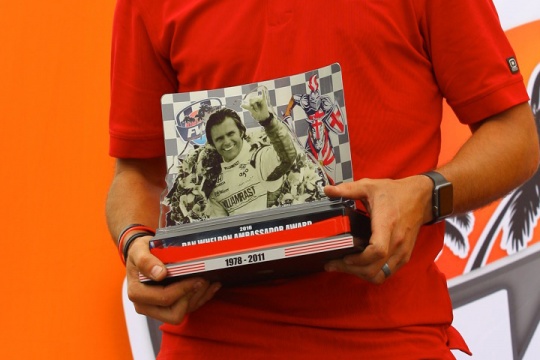 Press Release by: Race Tech Development
A new and deserving winner will be awarded the Dan Wheldon Ambassador Award in March.
The tradition continues in 2017 as once again, the Dan Wheldon Ambassador Award willbe presented at the final round of the MAXSpeed Entertainment Florida Winter Tour. Awarded by Race Tech Development's Mike Maurini and with Ben Cooper claiming the honors in 2015 and Garett Potter in 2016, the 2017 award will see another deserving team, group or individual claim the prestigious honors as the popular winter karting program closes out their 2017 season.

"I am honored to be able to continue the tradition with the Dan Wheldon Ambassador Award and present it in March," expressed Mike Maurini, who took over the program in 2015. "Dan was a great friend of mine, our family and the karting community as a whole. He was not only a racer, but he poured his heart and soul into the motorsport world and though his presence is not physical, we all know he is there watching down on all the racers of the world."

Created by former Florida Winter Tour Owner and promoter Bill Wright, the Dan Wheldon Ambassador Award is expressed in his words as two fold: First to honor the memory of Dan Wheldon, secondly to inspire others to be aware and adopt the personal attributes that made Dan an outstanding father, racer, friend and a strong and positive image for the karting community.

Continuing the Wright's tradition, the award will be presented to a Florida Winter Tour participant who best represents karting with a highly competitive spirit, a helpful and positive attitude, and a professional image. The eligibility for the award requires the recipient to be a Florida Winter Tour participant. Although drivers are the most prominent part of any series, success in karting requires groups of individuals including parents, tuners, mechanics, coaches, team managers, business owners, importers, track owners and event promoters.

Maurini added, "The list of award winners from previous years include Jim Russell Jr., Alan Rudolph, Jorge Arellano, Ben Cooper and Garett Potter. I can't wait to see who will be the recipient in 2016."

With the award being given out during the final Sunday of the Florida Winter Tour, nominations must be submitted to Mike@RaceTechDevelopment.com anytime between noon on January 13, 2017 to noon on Friday, March 17, 2017. The award recipient will receive a personalized trophy/plaque in addition to a copy of the Michael Voorhees photo book "Dan Wheldon Lion Heart", created by Michael and Dan for Dan's parents and fans.