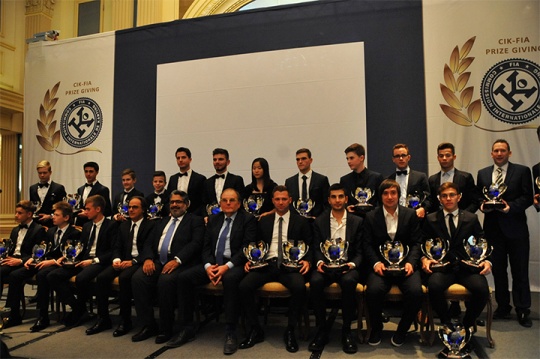 Press Release by: FIA Karting
The CIK-FIA prize-giving ceremony closed the 2016 season in Vienna in the presence of the President Shaikh Abdulla Bin Isa Al Khalifa and of the Vice President Kees van De Grint. On stage all the World and European champions of the season which has just ended.
THE KARTING CHAMPIONS GATHERED IN VIENNA.

The prize-giving ceremony of the Champions of karting took place in Vienna last weekend. The gala was hosted by the Grand Hotel Wien and enjoyed the presence of the CIK-FIA President Shaikh Abdulla Bin Isa Al Khalifa and of the Vice President Kees van de Grint. They were introduced by WSK Promotion President, Mr Luca De Donno. Great satisfaction was expressed for a season characterised by the important technical improvement brought by the new OK engines. The continuous innovation confirms – this year too – the great vitality of karting, which has achieved outstanding goals; goals that – as the Promoter stated – have gone well beyond what expected.

The figures at the end of the season confirm that the change so strongly supported by CIK-FIA has given the expected output: simplification at a technical level and, consequently, cost reduction. This produced an increasing number of participants in the races: drivers coming from 55 different Countries and from the 5 Continents. Also the promotion carried out by WSK has made great progress, as proved by the 185 Countries where the video programmes – both prerecorded and live events - produced by WSK are now broadcast.

A PARADE OF CHAMPIONS IN VIENNA.

The first driver of the long list of champions to receive an award was the Japanese girl Shion Tsujimoto, who got the prize of the Women in Motorsport Commission. Then it was the turn of the protagonists of the CIK-FIA Karting Academy Trophy, awarded by FIA Vice President Morrie Chandler. The trophy was won by the British Callum Bradshaw ahead of the Dutch Kas Haverkort and the Swedish Alfred Nilsson. The prizes for the several CIK-FIA Championships were then given by the Secretary General Kay Oberheide and the CIK-FIA members who took part in the ceremony. After that, they left the stage to the FIA Vice President Carlos Gracia, the CIK-FIA President Al Khalifa and the Vice President van de Grint: they gave the awards to the World Champions. Among them, Pedro Hiltbrand stepped onto the stage many times: the Spaniard won the World 2016 OK Championship, ahead of the Polish Karol Basz and the Italian Felice Tiene. A success which Hiltbrand achieved after winning also the CIK-FIA KZ2 Super Cup and the European title, always in OK. Many compliments also to the Italian Paolo de Conto, World Champion in KZ2 ahead of the French Anthony Abbasse and the Italian Marco Ardigò, and the French Victor Martins, winner of the OK Junior World Championship ahead of the Spanish David Vidales and his fellow countryman Théo Pourchaire.

ALL THE DRIVERS AWARDED BY CIK-FIA.

The other Champions awarded for the European CIKFIA Championships, besides Hiltbrand, were the two Italian Marco Ardigò (KZ) and Fabian Federer (KZ2) and the British Finlay Kenneally (OKJ). In the other categories, prizes went to the English Gavin Bennett (European Superkart Championship) and the French Fiault, Becq, Petit and Hubert – they won the CIK-FIA Endurance Championship. A prize was given also to the Dutch Thom Meijlink, for his long contribution to the world of Karting. The “Best Event” trophy for the CIKFIA season was given to the Kristianstad Karting Klubb, while the Bahrain International Circuit won the “Exceptional Event of the Year” trophy.