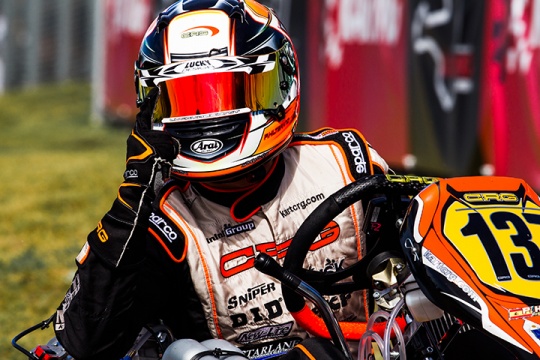 Author: Vroomkart International
An exclusive interview to the most popular driver of the moment: Pedro Hiltbrand
After winning the European and the KZ2 “World Championship”, you must have got loads of compliments… but I bet that’s nothing compared to the success you have had over these last days, right?

Sure, I got loads of compliments for the KZ2 International Super Cup, but a "World Championship" we all know what that means. Ever since I won I have been getting lots of requests for interviews. There are also a lot of calls, texts from releatives, friends … fans. Honestly I’m very happy and thankful, you got to appreciate such moments.

Going back to that “great day”, when you overtook Karol Basz, a move that gave you the title, was it instinctive or a strategy?

He wasn’t expecting it, neither were the others, because usually no one overtakes at that point. I knew I was much faster on the last corner exit at that point and even if he had gone towards the external part of the turn he’d have lost anyway. It was strategic, but a risk too, but then if you want to win you have to risk.

The moment you cross the finishing line with arms outstretched and your mechanic, Peto Nieves, kneeling at the end of the straight, will not only remind us that this is a team sport, but will remain in the history of karting too.

Peto, a fantastic mechanic, he’s also been one of the best drivers in Spanish karting. We started working together last year and that was a great change for me. We got second place in the European KZ2, after we had missed the title, but we both learnt a lot from that and it has made us stronger. A mechanic is always an important part of a team, but Peto and I form a fantastic team, and this is a great advantage that has given us brilliant results.

After many years with such success in CRG, I should imagine that it was hard to say goodbye… wasn’t it?

Yes, it was. Not so much for the success gained, but for the times together we had over four years, but then again Tony Kart means my going back to OTK, where I started racing at an international level. Sometimes you have to take difficult decisions, but racing with Tony Kart is an opportunity that I just couldn’t let slip away.

How did you come to an agreement with Tony Kart?

Well, after having won the European we got into contact and we talked things over to reach an agreement just like what had happened th CRG. Then, in the end I decided as a matter of personal challenge, in a way. I had practically won what there was to win with CRG, I saw a chance of growing more with Tony Kart. I’m looking forward to the coming season, aware that it’s going to be hard to repeat this year’s results, but we know that Tony Kart has the potential to aim at and win any title.

Do you feel the pressure now that you are expected to win again with a new team?

We are the ones who put pressure on ourselves, and I intend to put the necessary amount. This is a good period for me, everything is going well and I feel I’m stronger than I have ever been...

So you feel you can repeat yourself, or do even better than you have done in 2016?

II always say the same thing and repeat myself, this year is going to be a difficult one, but not an impossible on. We’ll be up front there’s no doubt about that, but if we win or not, as you know in the racing world this doesn’t always depend on us, Anyway, I am at a place like Tony Kart with a great potential, this is a place where they work hard and we are going to work together to win. I have a great ambition and even if it will be hard to get through this year, I believe that with hard work and willpower it is possible to achieve.

You are going to be at the top OK racing classes, do you think you will be racing any KZ events too?

We’ll have to see, whether there’s any chance of taking part in the KZ world championship is something that we’ll see this coming year.

Is the OK class "fulfilling" for you as a driver or do you miss more intensive racing, in other word, do you miss competition offered by KZ?

Well, as I said, if it were the old KF, I wouldn’t have the same interest. The truth is that the OK is a kart that I feel good with, it reminds me of the old 100cc, without a front brake and direct drive. I think that the change of engine has been a big step in category, As for KZ, it’s one of my aims for the future, but for the time being I want to dedicate myself to OK for two or three years before moving to another class.