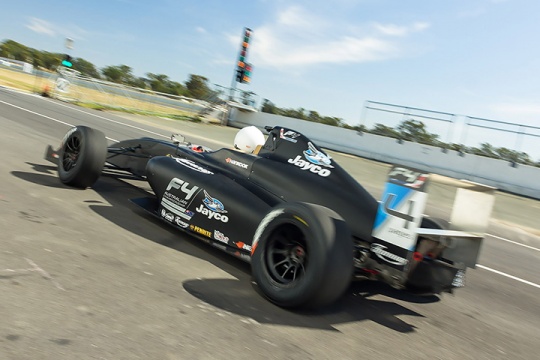 Press Release by: Karting Australia
The top three finishers from the KA2 class in the 2016 Australian Kart Championship presented by Jayco and Castrol EDGE received part of their prize.
The trio were part of an official test day for the CAMS Jayco Australian Formula 4 Championship at the Winton Motor Raceway in Victoria

Champion Jack Doohan, fresh from his campaign at the World Championship in Bahrain, was joined by runner-up Harrison Hoey and third placed Broc Feeney who both recently competed at the SuperNationals in Las Vegas.

It was a first for all three drivers to experience the open-wheel machinery, which provided them with a taste of the next step in the motorsport pathway courtesy of CAMS and Jayco Australia.

“I really enjoyed the day, it was a great opportunity to get behind the wheel of a Formula 4,” said Hoey. “Hitting some high speeds at the end of the straight was very cool. The downforce and braking power was a very new experience, it took a bit to get used to but by the end of the day I felt comfortable in the car. I’d like to say a big thank you to everyone at CAMS and Jayco for the opportunity to be a part of the test day and it certainly provided me with a great experience I’ll take with me in my racing.”

For CAMS General Manager Michael Smith, having the trio as a part of the test day was a great reward for their achievements in the Australian Kart Championship during 2016. “The drivers adapted to an open-wheel race car with great ease. Our driver coaches and teams were suitably impressed by the skill and maturity displayed by the youngsters,” said Smith. “Despite the warm weather, the drivers were keen to get in as many laps as possible as they revelled the chance of driving a Formula 4 car. We look forward to seeing some of the current crop of karting champions, and many more currently karting, becoming part of the future of Australian Formula 4.”

The 2017 Australian Kart Championship kicks off in Newcastle on February 10-12 with the 2017 CAMS Jayco Australian Formula 4 Championship beginning at Sandown on April 7-9.