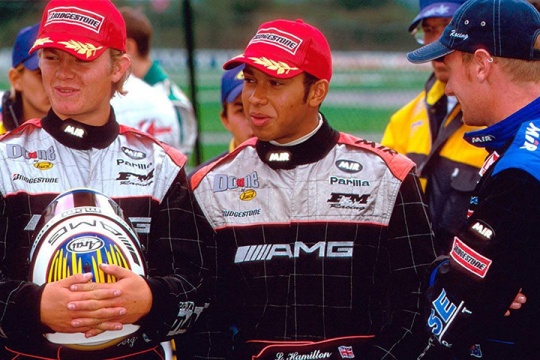 Author: Vroomkart International
Nico Rosberg is the new F.1 world champion, and he finally won his duel against Lewis Hamilton, 18 years later...
Hamilton VS Rosberg is a tale that lasts since karting, since they joined Dino Chiesa at MBM in 1998:

“Lewis was pure talent: Nico was a brilliant tester and was very good at setting up his kart. If we go over Rosberg’s career it’s true that he was an eternal second, but look at who his team mates were: Robert Kubica in CRG from 1998 to when he moved to MBM, and Robert was another crystalline talent; Lewis Hamilton in MBM and then also in F.1. Before being with Hamilton in the pit Nico had to deal with the likes of Michael Schumacher! If Hamilton hadn’t been from that generation of pilots, maybe now Nico would be three times world champion...!” said Dino Chiesa on September’s issue.

Yesterday the dream came true: Nico Rosberg is the 33rd F.1 World Champion, the first German champion winning with a German car, the second Rosberg on top of the world. And he is not the eternal second any more…

“I’ve really learnt to focus and it takes a lot of sacrifices also to stay so focused, but in the end I won the F.1 World Championship with the number six as well, it’s a very lucky number for us. Every Saturday night I get a message from my father and most of the time it’s like ‘pedal to the metal tomorrow, full stop, exclamation mark.’ So that’s his words of advice every weekend. But my Dad and my Mum both have such a big part in this, my Mum on the private side of course and my Dad for the career steps and all the support all the way. It was massive. I think it’s been good how’s he’s let me get on with it and taken a step back. I think it’s been very very good and it’s worked well for us and for me, it feels right, so I’m very very thankful for that. It’s his way of stepping back a bit for sure.

It’s crazy. The thing is the race was so intense it’s still going to take some time I think to settle it and come out because it was really intense out there and so tough in the end. Those last couple of laps with those two guys behind. If I dropped being them it’s over so not enjoyable.The feelings out there in that battle with Max… unreal, really unreal. I hope I don’t experience that again any time soon. And the same again at the end, you know: pressure on from behind, Lewis driving slow at the front. It was a tough one.

That’s really, really special. It’s a special feeling, a very unique feeling. I’m very thankful to all of my fans. And then of course the people closer to me. It’s my whole team, which is my racing family. I joined Mercedes in 2010 and it was a rough ride initially and now it’s come good in the last years and now it’s come good for me today – and that’s very, very special also. So, big thanks to my racing family, to Mercedes, to my family, to all of my team around me, working around me.

Everybody has there part in this. It’s such a long way to get to today, really. My go-karting engineer from when I was ten was writing me last night, memories from ten years old, fighting for the French championship, stories of motivation he was sending me yesterday, so it’s just all the way from there, every year it builds up to this success today. Even all those people through my career. I had a lot of important mentors in that sense. All the way through. If this is the moment to mention them, I will. It’s Dino Chiesa in go-karting, then in cars it was Team Rosberg and Peter Sieber and Erich Baumgärtner in Formula 3. Arno Zensen, Team Rosberg. After that came GP2 where it’s Nicolas Todt, Fred Vasseur, big thanks to them for getting me into F1, and Steve Marcel who unfortunately passed away. After that F1, Williams, Frank Williams, Sam Michael, Patrick Head, to get me into F1. And after that, what come after that? The people that took me to Mercedes, that was Norbert Haug and Ross Brawn, Nick Fry, thanks to all of you to get me into Mercedes. That was the beginning of the story, and then of course Toto, massive thanks to Toto and Paddy and Niki for continuing it on and taking me to where I am today.” comments Nico Rosberg after the race.

This is the proof that the hard work and motivation sometimes pay more than pure talent. He definitely deserved it. Well done Nico.