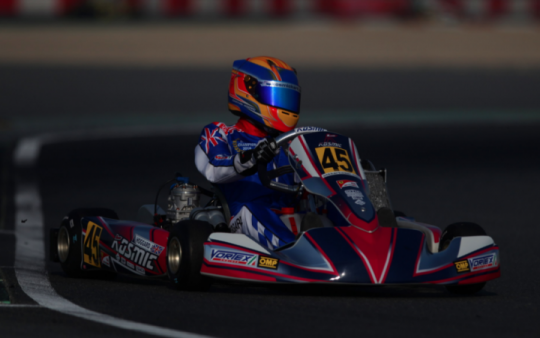 Vortex, as the sole engine supplier for the two championships, CIK-FIA Academy Trophy and British Karting Championship, at the beginning of the season had offered a great prize for the respective winners, the opportunity to attend the World Championship in OK and OKJ class as official Vortex drivers.
Thanks to the agreement between Vortex, CIK-FIA and the MSA, two emerging young drivers Callum Bradshaw and Jonathan Hoggard, were included in two of the most renowned teams in the world, the Tony Kart Racing Team and the Kosmic Kart Racing Department.
Callum Bradshaw ran on the Bahrain International Circuit in OKJ category with the Tony Kart Racing Team and Johnathan Hoggard wore the Kosmic Kart Racing Department colors, making his debut in the OK category.
Both drivers performed perfectly, showing their skills and getting good results. Bradshaw and Hoggard entered into their final, beating a very tough competition. This shows that the categories from which they come both, CIK-FIA Academy and BKC, are an excellent investment for the future of karting.

“I really enjoyed my experience in the Vortex and Tony Kart Racing Team in the OKJ world finals in Bahrain which was an unbelievable prize. The support and advise I received from the team was invaluable and was pleased that I was able to showcase my skills and in particular my speed all week. I would like to thank the whole team who were extremely friendly and welcoming and special thanks to Mr Robazzi and Mr Corona for making this exciting experience happen for me. I hope our paths might one day cross again as I continue my journey in this incredible sport.”

“Vortex offered me an amazing opportunity to race with the Kosmic Racing Team at the CIK FIA World Championships in Bahrain - something I was determined to grab with both hands. It was always going to be tough at my first OK senior race meeting against the very best drivers in the world. The extra speed of the OK engine and grip in the Vega tyres took time to get used to, but a solid set of heat results offered confidence going into Saturday's finals. A p9 finish in my pre-final meant I had achieved my objective of qualifying for the main final. The p17 grid start gave me confidence that I could challenge for a top 10 finish in the World Final. Unfortunately it was not meant to be! At the start of the race I was tagged by another driver in turn 1, forced off of the track and was firmly in last place at the end of lap 1, eventually finishing 28th. That is the ups and downs of motorsport.... I am really pleased with my results over the week and would like to offer a huge thank-you to Kosmic Racing Team and Vortex engines for the opportunity, superb equipment and all of their help and advice throughout the meeting..”