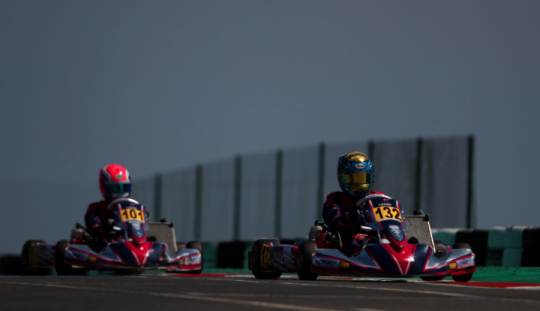 The Racing Department we will be on track in OK class with the World Champion in office, Karol Basz, whose image stands in the official poster of the event. In fact, just a year ago, we conquered the title in the KF category, now replaced by CIK with the new OK.

The Bahrain Circuit is used to such this prestigious events, just on the Asian track in 2013 was held the final round of KF and KFJ World Championships. This World Championship’s edition will take place on a single session, from 16th to 19th November, when our drivers will fight in the World Championship, competing under perfect lighting of the ultra-modern track of the Kingdom of Bahrain.

In OK class we will have the aforementioned World Champion Karol Basz and Noah Milell, driver who has successfully performed during all season with the "Blue" Kosmic kart. Next Basz and Milell and we will have two newcomers, the British drivers Thomas Michael Bale and Jonathan Hoggard.

In Bahrain Ulysse De Pauw will have his debut in OK category, since in previous competitions he has always run in OKJ.
Among the OK Junior cadet drivers, we will lineup three drivers who have faced the season with our colours, Théo Pourchaire, Charles Weerts and Daniel Vebster.
The global event will be fully broadcast in live timing and live streaming the whole day of Saturday 19th on the official CIK-FIA channel.
The performance of the Kosmic Kart drivers will be followed with particular attention on our social Facebook and Instagram pages, without forgetting that on the eve of the World Championship has been introduced the brand new kosmickart.com website; completely new in contents, images and graphics. One more reason not to miss the crucial phases of the Bahrain competition through a modern and complete tool.