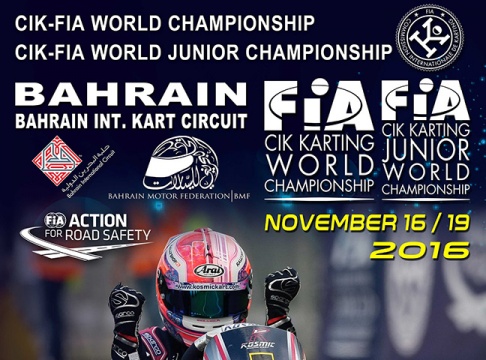 Press Release by: FIA Karting
The Kingdom of Bahrain will once again host two CIK-FIA World Championships after the success of the 2013 edition. The new OK and OK-Junior categories will benefit from the exceptional welcome and surroundings of the Bahrain International Kart Circuit and the magic of night races to reveal their first World Champions.
The Competition will take place from 16th to 19th November 2016 at the same time as the 6 Hours of Bahrain which will conclude the FIA ​​Endurance World Championship a few hundred meters away on the Bahrain International Circuit.

Fast and undulating, the route of the Bahrain International Kart Circuit has always been unanimously popular among the Drivers. The track, very wide in places, allows different lines to be used to encourage overtaking. The very powerful lighting ensures excellent visibility conditions while preserving a unique atmosphere for the many races taking place after sunset. Indeed, the particular schedule of this Competition will start from 1:30 pm and finish in the evening, the Finals being scheduled at night, on Saturday, November 19th between 6:30 pm and 8 pm (UTC + 3).

The only CIK-FIA World Competition organised outside Europe this season, the double Bahrain World Championship is receiving significant financial support from its hosts for equipment transportation, travel, accommodation and food for the Drivers and their mechanics fully supported by the Kingdom.

On the sporting front, the Competition looks very open. If the start of the season for the new OK engines has revealed a certain hierarchy in performance, it is not impossible that the cards will be shuffled for Bahrain thanks to the hard work of the factories and the teams since the last European race at Genk (BEL) at the end of July. Predictions are therefore very difficult to make before the start of the Competition. The total number of entries is approaching 150 drivers, a very honourable number for such a high level Competition.