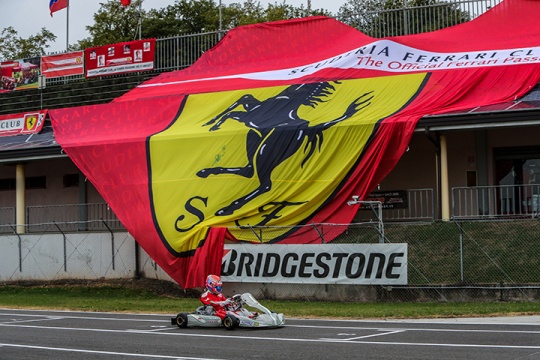 Author: Vroomkart International
Karting and car racing are closer than ever after the new partnership set up between Ferrari Driver Academy and Tony Kart. We met Antonio Fuoco in Lonato and he answered some questions about his life and career.
After a successful career in karting, in 2011 Antonio Fuoco won the SuperCorso Federale CSAI and the following year raced as official Kosmic Kart Racing Department driver, ending his karting career in KF2 with a 3rd place in the WSK Super Master Series and a 4th place in the CIK-FIA European Championship.

Enrolled in the Ferrari Driver Academy, in 2013 he stepped into car racing, and he immediately won the F. Renault 2.0 Alps with Prema Powerteam. After a 5th place in the FIA F.3 European Championship in 2014, Antonio moved to the GP3 Series where he finished 6th last year, while this year is fighting for the title against his FDA team mate Charles Leclerc and Thai driver Alexander Albon.

With 48 points up for grabs at the final round in Yas Marina, Leclerc is in pole position for the dice for the crown with a 29 points lead over Albon and 45 points ahead of Fuoco, which shows that the game is still open in Abu Dhabi and every point counts.

How is it to be back in a kart?

“I’d say it’s quite difficult! A kart is different to a formula both as far as driving is concerned and for the  physical effort required. I had the opportunity to race with OTK Group when I was in Kosmic, and driving a kart is always a great pleasure. I raced the direct drive classes, KFJ and KF2, but now I’m used to practising with a KZ which is a little bit different.”

How important is karting for a formula driver?

“It may sound strange, but, as I said, a kart is quite different from a car, so you mainly learn how to manage stress before and during a race. This is very important: the attitude is the same both in  karting and car racing, on the other hand, the difference is in how you drive and how you set up your car, which is different to karting.”

What does it mean to be an official FDA driver?

“It’s a honour and pride, both for the brand and the privileges that we have compared to our colleagues. I personally think that the sooner you start working in this kind of highly professional environment, the better the results. Ferrari has a lot of experience, which is being transmitted to us day by day. We have everything we need to grow quickly and professionally.”

Which are your best moments in karting?

“Best moments in karting date back to my last years in karting, when I was an official Kosmic driver. Especially my last year, I received a lot from an emotional and a professional point of view. They gave me the possibility to grow before stepping into car racing.”

Remaining on that topic, which are the most important aspects for a kart driver who wants to move into car racing?

“First of all, the fact that in karting you have to do a lot of practice, while in car racing you have a limited mileage: with the F.4 you have a major track time compared to  F.3 and GP3. So you need to be able to get to know the car and the track quickly, and you have to be quick  in setting up your vehicle. We’re trying to compensate for this lack of track time with a simulator, nowadays almost each team has its own simulator, and with some karting that remain a good physical and mental training.”

What is your daily routine?

“We all live together in Maranello; I live with Charles. In the morning we do some physical and mental training with our trainers and mental coaches so that we are ready under each aspect. In the afternoon we usually work with FDA engineers, the closer we get to the race weekend the more intensive  simulator sessions are.”

“FDA is a family, even if on track each one of us wants to be in front of the others. Out of the car we laugh and have fun together: we have been living together since last year, so we have a great relationship based on mutual respect, which is fundamental when working together.”

Any plans for the future?

“I should race the GP2, but at the moment we still don’t know with which team.”