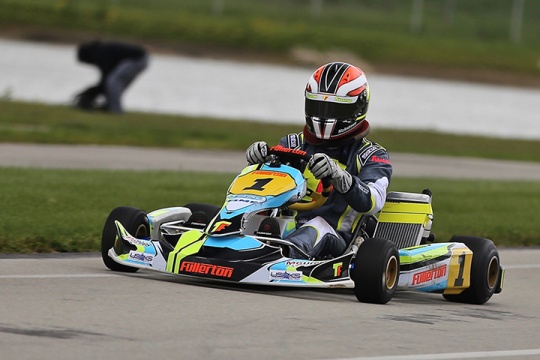 Press Release by: ProMedia Motorsport
Focused quartet of drivers aimed for race wins and podiums finishes in sport’s largest event.
For the last two years, research and development has been the primary focus of the Fullerton-USA operation, hitting the top regional and national events in the country to test new chassis designs in heated competition. The new Terry Fullerton-penned TF2 is the result of exhaustive effort, and the team will be attacking the major senior categories at the upcoming Superkarts! USA SuperNationals at the Las Vegas Convention Center, armed with this impressive piece of hardware.  Terry Fullerton will be under the tent as the Technical Director for the effort, which is managed by official Fullerton importers Rich Gutierrez and Lance McGrew, veterans in motorsports and the NASCAR community.  The team will arrive in Las Vegas with four talented drivers aiming to put the Fullerton yellow and black on the top of the podium come SuperSunday.

“We’ve worked hard to develop a chassis for the North American market and we’ve enjoyed success throughout the R&D process,” offered Fullerton-USA’s Gutierrez, who is also a full-time fabricator at NASCAR’s Hendricks Motorsports. “The result of our hard work, and Terry’s expertise, is the Fullerton TF2 and we’re ready to go full-bore to win races and championships, and to expand the dealer network for the new generation of Fullerton karts.”

Fullerton USA will put four talented drivers under the team tent for the SuperNationals, which will be run on November 16-20 on the expansive parking lot of the Las Vegas Convention Center.

In the X30 Senior category, the squad will be joined by Kartmasters British Grand Prix X30 winner Danny Kierle, who will have world-renowned tuner Mark Rose handling the wrenches under the Fullerton USA tent.  Team test pilot Mike McAndrews will pair with Kierle in X30 Senior, and he has unfinished business in Las Vegas after a tremendous week-long performance that culminated in a 21st place finish on SuperSunday after qualifying 65th due to a flat tire and a fifth place run in the Last Chance Qualifier.

Defending Superkarts! USA Pro Tour X30 Master champ Nick Tucker will bring his #1 plate to the Fullerton USA squad, and he will certainly be a challenger for the race win. The team will also extend its NASCAR connection with Hendricks Motorsports staff member Brian Davies, who will be running in the S4 Master Stock Honda class, and is easily a top-10 candidate in the stacked category.

The team will have extremely talented tuners working with Fullerton and Rose, as veterans Chris Lobaugh and Nick Johnston will be under the tent supporting the Fullerton-USA quartet.