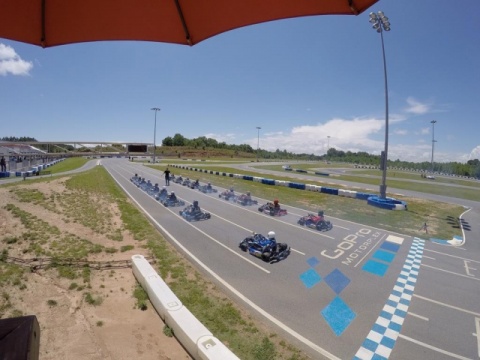 IAME Swift Division Sponsored by HMS Motorsport:
A total of 13 young drivers took the green flag for the division’s 12-lap final race. Devin Gomez checked out to an early four kart-length lead on the field. However, Aiden Baker Crouse was on rails, gunning for Gomez. Crouse was able to close onto Gomez’s bumper within the five opening laps. Gomez and Crouse were locked bumper-to-bumper, but behind their battle was a silent chaser, William Robusto, in third. By halfway, Robusto reeled the leaders in to create a three-kart, nose-to-tail battle for the win. With two laps to go, Crouse made his first move of the race around Gomez for the lead with a power-move down the frontstretch. Following his lead, Robusto hooked to Crouse’s bumper to steal second place from Gomez as well. On the final lap, Robusto continued on his charge to take the lead in Turn Four which proved to be the winning move of the race. Robusto scored the win, followed by a four-wide battle for position in his rearview mirror with Luka Mars finishing second. As the hard charger of the race, Brent Crews finished in third after starting shotgun on the field.

IAME Heavy Division Sponsored by Stitch 98:
In the IAME Heavy Division, Todd Shambo made it look easy by winning the pole in qualifying and the pre-final and strolling out to nearly an 11-second margin of victory in the final. John Wehrheim and Shannon Lee rounded out the podium.

IAME Junior Division:
In the IAME Junior Division 13-lap final, it only took two laps for the four frontrunners to break away from the field. Pauly Massimino, Lance Fenderson, Gray Leadbetter and Brooke Nachtmann all ran nearly nose-to-tail out front. As halfway was signaled to the drivers, Massimino continued to lead, but Fenderson was knocking on Massimino’s bumper and waiting for the perfect opportunity to make his move for the lead. Further back, Nachtmann was also patiently waiting to make her move for third on Leadbetter. With two laps to go, Fenderson was still toying with Massimino and waiting for the slightest mistake by Massimino to allow Fenderson to sneak by for the win. Patience was the key as Fenderson stole the top spot from Massimino in Turn One on the final lap. Fenderson captured the win, followed by Massimino in second and Nachtmann was able to score the final spot on the podium with a pass on Leadbetter with two laps to go.

Briggs LO206 Senior Division Sponsored by Todd Shockman RV Sales:
The Briggs LO206 Senior division featured a 16-kart field with Nick Tucker jumping out to an early lead with a two-kart advantage over Dan Koehler and Hank Hefner. However, after three short laps, the top-five had all closed onto Tucker’s bumper and were running nose-to-tail. Working together, the frontrunners freight-trained Tucker, sending him from the lead to fifth. Taking over the top spot was Koehler. By halfway, the top-five all began to shuffle for position, including a lead change sending Matthew Turner to the point. In the blink of an eye, Tucker had rallied back to the second position and began competing for the top spot. On the final lap, Tucker made his move to the inside of Turner in the Hoosier Hairpin to take over the lead. Tucker scored the win, followed by Turner in second and Hefner in third.

IAME Mini Swift Division Sponsored by CNC Performance Engineering:
In the IAME Mini Swift 10-lap final, Caleb Gafrarar had a dominating day in the division after winning the pole in qualifying and pre-final. Gafrarar checked out to an early lead on the field, pulling out to nearly three seconds over the six-kart pack of drivers led by Sam Corry and Sebastian NG in second and third. Gafrarar scored the win by a 4.641-second margin of victory over Corry in second and NG rounded out the podium in third.

IAME Senior Division Sponsored by MPI:
In the IAME Senior division final, Blake Hunt charged out to a dominating lead. However, behind Hunt, Robby Seward was on a mission, moving from third to overtake Michael Bovim for second. Seward then set his sights on Hunt. However, Hunt was just too strong, strolling easily to the win with nearly a four-second lead over Seward in second and Bovim in third.

Briggs LO206 Junior Division Sponsored by Race City Mobile Detailing:
In the Briggs LO206 Junior division 10-lap Final, it was a tight-knit group of drivers out front. The top-three of Seth Gentry, Alex Keadle and Jadyn Daniels were so close you could throw a blanket over them. However, with just two laps to go, none of the three were willing to make a move quite yet. On the final lap, Keadle stole the lead in Turn Four and brought Daniels with him into second position. However, contact between Keadle and Daniels forced Keadle to second position and Daniels to be penalized to third, giving Gentry the win.

Briggs LO206 Cadet Division Sponsored by EnforcerOne powered by FireAde:
In the Briggs LO206 Cadet Division 10-lap final, Aiden Baker Crouse took control of the top spot early. However, William Robusto was chasing down Crouse’s lead from the second position. Crouse proved to be too strong to beat, clocking the fastest laps of the race and actually improving his lead over Robusto toward the second half of the race. Crouse went on to score the win, followed by Robusto in second and Bree Miller in third.

Yamaha Junior Division:
In the Yamaha Junior final, Emory Lyda shot off to the lead but was trailed closely by Taylor Stanford in second and Chase Carey in third. By halfway, it was a heated three-kart battle for the top spot. Lyda was able to hold off a late-race charge from Stanford to capture the win. Stanford settled for second and Carey finished in third.

Kid Kart Division:
In the Kid Kart Division, Ayden Young, got some valuable laps of experience and was able to take home the trophy for the win as well. Today’s win marked his sixth of the season, well on his way to a championship!