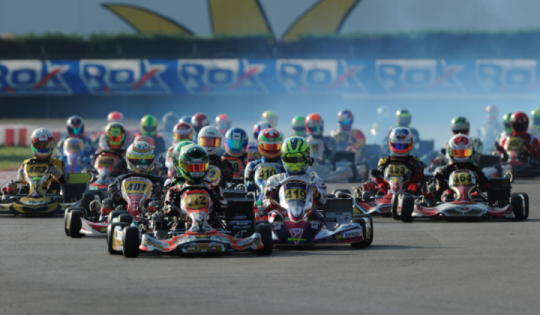 Press Release by: OTK Kart Group
In the Rok Cup International Final of records 2016 champions are Jacopo Guidetti (Junior Rok), Simone Favaro (Senior Rok), Nicola Marcon (Shifter Rok) and Riccardo Cinti (Super Rok). The grand final by Vortex has this year set a new arrival-departure point with a record of entries, 413, that few events can claim.
So important figures indicate that the trophy, the Rok Cup, is continuing his rise thanks to innovations made ay a well- proven organization, appreciated at all latitudes.
The fourteenth edition of the Rok Final will also be remembered for the huge presence of motorsport champions in the paddock. Mick Doohan (5-times motorcycling world champion), Emerson Fittipaldi (2 times champion of F1 and Indycar champion), Jarno Trulli (F1 driver), Juan Pablo Montoya (F1, Nascar and Indycar driver), Giorgio Pantano (F1 driver) and last but not least, the two Vortex champions, Marco Ardigò (World and KF1 and KZ European Champion) and Karol Basz (Karting World Champion).

The prize award ceremony which took place in the big Rok tent have stunned everybody thanks to a truly unique prize, appropriate for such an important event, with the assignment of chassis, engines and technical equipment, for a total value of more than forty thousand Euro.

In the Rok gold book the only champion missing is the Mini Rok’s, since the final standing was sub judice and we just have to wait for the sporting authority’s decision to find out the winner’s name.

Since the qualifying stability reigns supreme in the Rok cadet class. Brigatti signs a magnificent pole position on a wet track and in the heats it’s Carenini and Guidetti who gain the first row, with two wins each. Grinbergas (LTU) is third, he too with two victories. In the qualifying races leaders for one time are Szczurek (POL), Doohan (AUS), White (ZAF) and Sudirman (IND).
At the starting grid of the Carenini and Guidetti do not make mistakes and and run fast to the lead, in this order, followed at a distance by Szczurek, Grinbergas, Doohan, Urbanian and White.
After a few laps, next to the leaders Carenini and Guidetti, Grinbergas adds, this way the trio shows an unparalleled pace for the rest of Rokkers.
The three leaders continue until three laps from the end, but it is at this stage that Guidetti starts to seriously fight against the leader Carenini overtaking him on the thirteenth lap. Grinbergas shows that he is willing to fight for the victory and tries to take second place.
Carenini does not give up and runs just behind Guidetti. The arrival image in the sprint of 2015, complete with a multi-collision on the finish line, is still alive and the tension rises dramatically in the last lap. Guidetti is at the lead in the final stage but Carenini, desperately trying to repeat his international title, crashes against the opponent, detaching his front bumper and so taking a penalty of 10", provided for this kind of violation.
Under the checkered flag is Carenini first, however the Junior Rok 2016 champion is Jacopo Guidetti, followed by the Lithuanian Grinbergas.
The talented South African White gains the last step of the podium after a thrilling battle with Grinbergas, followed by Urbanian, Pagano, author of a formidable comeback, and poleman Brigatti.

Favaro gains the starting grid from row number one after having dominated qualifying and heats, with three wins out of three.
The only ones that in this first phase are able to have a little gap are the Italians Di Cori and Cristian Comanducci, the Swiss Michael Muller, and the Polish Szysko.
Once the final’s traffic lights are off, Favaro puts a script already seen over the weekend on the scene of the Rok Final and runs toward the title, leaving everyone behind.
In second position we find a usual Rok protagonist, Muller, always amongst the best drivers, who overtakes the former international Rok Junior champion, Di Cori. The latter reacts promptly to the attack and takes the second place.
In the early stages of the race we find at the lead another young talent, Cicognini, author of a great comeback after having suffered some bad luck during the heats.
With Favaro flying towards the title, the final stage of the race is enlivened by the tussle for the podium that sees Di Cori, Muller and Cicognini.
Everything is done at the seventeenth lap when Cicognini and Di Cori annoy each other in the fight for second place. Muller does not waste time and passes in front of the two litigants, going to take the title of Senior Rok champion.
Behind the four protagonists of the race there are Laurini (ITA), Szyszko and the American Norberg, signing of a great comeback taking him from the nineteenth to seventh position.
Among the many protagonists of the final we want to mention the Rookie Mandelli who, although retired in the final, had the merit to enter among the 34 finalists at the end of his first karting season.
Another Rokker we want to mention is the king of overtaking in the final, Florindo (ITA), able to recover twenty positions. Just in terms of overtaking it is curious to note that the new champion was so perfect, during the whole Rok Final, that he did not have to make even one overtaking. Favaro has always jumped from the first position and has maintained it from start to finish, in the heats and in the final!

The defending champion, the Italian Riccardo Cinti, is fought in the qualifying by Aldera (ITA) and by pole man Casper Hansen (DNK). Only at this stage of the event Cinti has someone in front of him, actually in the heats and in the final the Roman drivers shows a formidable superiority, worth the third Super Rok International Champion’s title.
At the start of the race that awards the title there is no one ready as Cinti, who lines up a sequence of fastest laps to discourage opponents, led by Andrea Moretti.
The first two positions are soon clear, with Cinti and Moretti who take off on the rest of the group, while remaining at a safe distance from each other.
Fortunately, the battle for third place keeps the interest alive, thanks to Gheno, Russo and Andrea Moretti who exchange positions and remain in close contact until the final sprint.
Under the checkered flag Gheno takes the podium next to Moretti and Cinti.
In the top positions, after a difficult weekend, we also have two young and always fast Rokkers, Imberti and Mazzotti, in the queue of the leading group.

The first phases of the event are marked by Brazilian drivers Di Mauro and Barrichello. The first surprises everyone in qualifying, by printing the pole position on a wet track, on the last useful lap, then he wins all three qualifying heats, running fast even on a dry track.
"Rubinho" comes in Lonato together with his sons and grandson, eager to spend a week of karting, in the Rok, with his family. Barrichello joins the fray and show that the class is intact, winning a heat and earning the third row in the final grid.
At the start Squaranti is a lightning and overtakes the Brazilian Di Mauro, taking the lead ahead of Di Mauro, Marcon, Sani and Barrichello.
Just a few laps later and the lead, along with Squaranti, goes to Marcon, so it is immediately clear that the fight for success is a matter between the two of them. Only Di Mauro, though detached, remains at the leading pair sight.
The platoon of the pursuers is led by Sani and Barrichello, who are pressed insistently by Bensi (ITA), Bottiroli (SWI), Vannini (ITA), Weibel (SWI).
Shortly before half distance, on seventh lap, duels become inflamed. Barrichello and Sani are attacked and overcome by Weibel and Vannini. Only one lap after the race is done with a large gap of Marcon on Squaranti on the first bend. The two rivals are stuck for the rest of the race but Squaranti no longer finds the right rhythm to recover the victory.
The third place is always in the hands of the young Di Mauro who completes a podium made by young talents of great value.

The 168 Mini Rokkers who came in Lonato were led in qualifying from the Mallet, who under the pouring rain is good and lucky, so as to earn the opportunity to gain the pole in all the heats.
The platoon of the Mini, after qualifying, was divided into two batteries for facing the many qualifying races to the final.
In the group-1 Mallet confirms his lead and wins three heats and the first row in the final. The other protagonists of this group are Cecchi, with two victories, the Brazilian Bortoleto, the Russian Small and the Malay Puetar. These last three are authors of a success apiece.
Just behind is the Polish Kucharczyk (12th), out in a heat but first place on two occasions, as Cecchi.
In group-2 of the qualifying the protagonist is the Italian Delli Guanti, three times first position, before the American Ugochukwu and Italian Bosco, both with two wins.
Leaders for once in the heats are also Minì (2 wins) and Crawford (USA).
The final starts under the sign of poleman Mallet which carries behind a group made up of Cecchi, Bosco, Delli Guanti and Bortoleto.
At the fourth step Delli Guanti breaks the delay and after having overtaken Cecchi, exerts a strong pressure on the leader Mallet. Behind Cecchi, third, there are, well determined Bosco and Smal.
On tenth lap Cecchi breaks the delay and passes Delli Guanti, pulling Mallet. A few meters after the double overtake, Delli Guanti is touched and passed by Smal. This episode will be decisive for the outcome of the race, because it will cost the Russian a penalty of three seconds.
In the last two laps Smal is very fast, bridges the gap that separates him from Cecchi, overtakes the leader and go to cut the finish line first.
Behind Cecchi the formidable driver is Delli Guanti, not demoralized at all after the crucial episode with Smal, the Italian Rok Champion wins over two talented opponents like Bosco and Mallet.
After the race Smal’s play on Delli Guanti, as already said, is sanctioned with three seconds of penalty.
Smal’s entrant appeals to the inflicted penalty to his driver and the ranking is consequently declared sub judice, so the title will be awarded after the sporting authority will announce its decision.