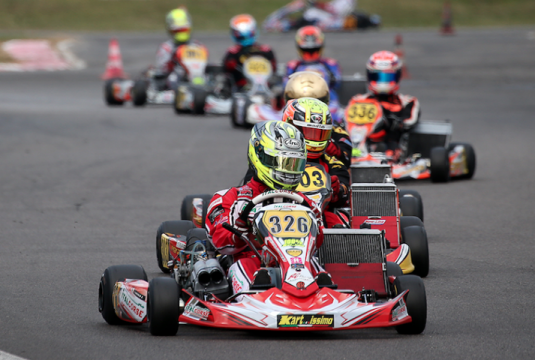 A few days are left ahead of the event scheduled for 28-30 October and 206 drivers have already entered the race. The great presence in KZ2 reached level 64, requiring a re-definition of the cap, 60 Mini will welcome 72 drivers on track, OK Junior 52 and finally Prodriver currently has 18 drivers split between Under and Over.

A total of 27 countries will be represented in this spectacular event. The most represented country is Italy, with 50% of the drivers (104), but several other countries also feature good numbers, as Russia that gave birth to 22 entered drivers, Denmark to 12, Sweden to 8, Germany and Switzerland to 6, Austria and Estonia to 5. Non-European countries will also be represented, as some drivers come from Australia, Brazil, Barbados, China, Canada, Singapore and South Africa. The most numerous team is the Swedish  Ward Racing that will field 18 drivers. Works teams of the likes of  CRG, Maranello Kart, Birel Art, Energy, Evokart, DR, TB Kart, CKR, Parolin, VRK will also be present, as the main teams like Baby Kart, Gamoto, Formula K, Revolution, Lario, Giugliano, RL Competition, Ricky Flynn, Morsicani, Emilia Kart, Renda and several others.

Among the latest entries, KZ2 will have the presence of the young Dutch driver of CRG Holland Max Tubben, who recently won the German DKM Championship in KZ2 Cup, the very quick Lorenzo Lapina on Italcorse-Modena, the two times European Champion Fabian Federer on CRG-Modena, the several times Champion Alessandro Piccini on Tony Kart-Vortex, while team VRK will field Luciano Medeghini and Salvatore Gentile.

Giuseppe Fusco has joined the pack of young drivers challenging each other in OK Junior with Evokart. The entry list of the 45th Trofeo delle Industrie si completed by Prodriver Under and Over drivers, with several specialists of the two categories that have always produced spectacular races in Lonato.

Live Streaming feeds will be available on Sunday October 30th at www.trofeodelleindustrie.it and www.southgardakarting.it

The programme of the 45th Trofeo delle Industrie (local time):

The usual rich prize ceremony for all categories will close the event. 60 Mini, OK Junior and KZ2 will also fight for the Comm. Carlo Fabi Trophy.

Live Timing and Live Streaming feeds will be available at www.trofeodelleindustrie.it and www.southgardakarting.it