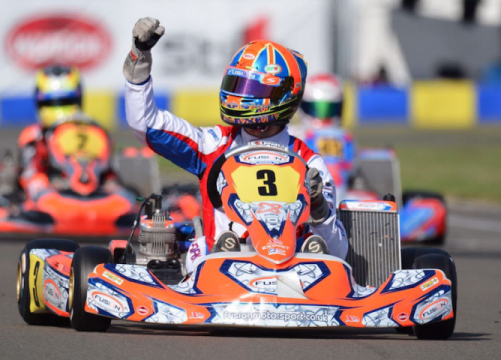 Press Release by: OTK Kart Group
The myth that OTK chassis are not well suited to the IAME X30 classes was firmly dispelled at the weekend when Oliver York, Callum Bradshaw and Oliver Clarke took the Junior honours in France, while Hugo Ellis won the Senior final.
Fusion’s York and BKC’s Bradshaw demonstrated the capabilities of OTK’s Exprit kart to great effect, while Clarke and Ellis achieved their success on board Tony Kart chassis.

Oliver York’s victory was all the more remarkable at the world famous venue after he recovered from starting from the back of the grid for each of his heats to ultimately beat 129 other drivers.

France’s Victor Martins guided his Kosmic to the pre-final win, ahead of Bradshaw and Irish driver Sam McDonnell, also on an Exprit. Maybin, Clarke and York completed the top six.

Saving his best for last, York turned on the style to win the biggest race of his career to date, leading home compatriots Bradshaw and Clarke.

The Senior class had also attracted a huge grid, with 124 competitors vying for glory. Once the heats had been dispensed with, it was Jordan Nutley-Brown and Ellis who spearheaded the UK’s OTK challenge. However, in a rumbustious pre-final Nutley-Brown would DNF, while Ellis crossed the finishing line in 16th place.

A terrific performance from the talented ADP star saw him pick his way through the pack to triumph on the grandest of stages.

In X30 Master, the top five chassis were all Kosmics, with Graham Hill 6th on his Exprit. Thomas Bale was pipped to the post in X30 Super by Victor Compere – both were on OTK karts.

“There were 23 OTK chassis in the Junior final and 25 in the Senior equivalent,” observes Strawberry Racing’s Warwick Ringham. “In the main finals for those two classes, eight of the top ten in Junior were OTKs and seven in the top ten of the Senior race. All I’ve heard for the past three years in the paddock is that OTKs don't work in X30 but these results blow that theory apart.”

He adds: “In the wet and the dry, there was an OTK kart at the sharp end. Of course, you don’t have to use an Exprit, Kosmic, Tony or FA kart in X30, but why make life hard for yourself?”