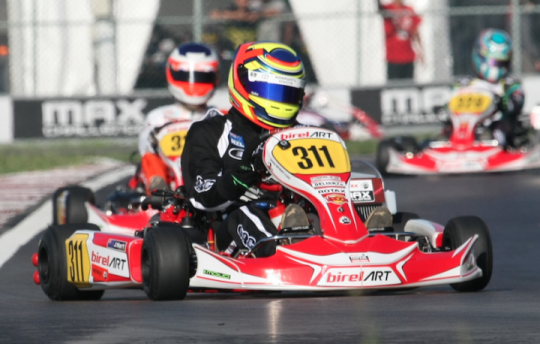 Swiss driver Titus-Shanghai Schmidll keeps the head of the race over local driver Michael Rosina, while Brit Jonathan Hoggard finds some serious speed and takes the second position on lap two, with Rosina following in third. Mark Kimber from UK finds his way to the podium, overtaking Rosina on lap 5 who loses other positions finishing 9th under the chequered flag. On the last lap Hoggard gets the better of Schmidll and wins the prefinal B.

Frenchman Adrien Renaudin steals the lead of the race from Belgian Noah Rooves, followed by Cody Gillis in third. The leader opens a considerable gap, while behind him Koki Mizuno, Cody Gillis and Norvegian Ruben Kverkild fight for the lowest step of the podium. Kverkild goes beyond, and he takes the second position overtaking Noah Rooves. Glenn Van Parijs finds his way to the podium in the final phases of the race, and he is able to gain the third position.

Immediately after the green flag Scott Campbell defends the head of the race from Denis Kroes’s attacks, while the leading duo is followed by Lee Mitcher. On lap four the fight for the lead flares up once again, and Lee Mitcher is able to close the gap and he starts battling for the lead too. Mitcher goes on the grass, being forced to settle for third, while Kroes is still focused on the first position, and finally on lap 13 he is able to overtake the race leader and earns the first spot greeting the chequered flag in first position.

Danish Christian Sorensen holds the lead of the race over Kiwi Josh Hart and Kevin Lüdi. The following lap Hart overtakes Sorensen and grabs the head of the race opening a one second gap over the runner up. Behind the leading duo Marco Signoretti from Canada tries to steal the third position from Kevin Lüdi’s hands, but the Swiss driver holds his position. In the end it’s Pascal Marschall from Germany the driver able to grab the third position from Lüdi, who loses the fourth position in favour of Simas Juodvirsis.